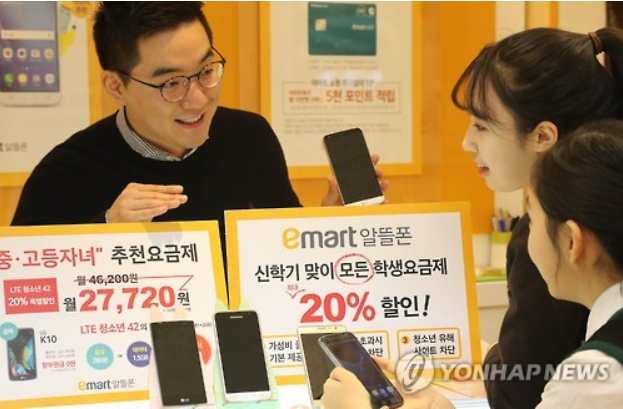 The number of MVNO subscribers doubled between 2012 and 2015, but the growth rate fell to 30% in 2015, and 16% last year. The image shows a marketing campaign for MVNO phones at E-Mart. (Image courtesy of Yonhap)

SEOUL, Feb. 13 (Korea Bizwire) – The number of MVNO subscribers is about to exceed seven million, a sign of market maturation over the past six years.
However, due to sluggish growth that began two years ago, businesses are desperately struggling for existence.

MVNOs are putting significant efforts into finding a way out by diversifying their plans and strengthening customer service.

According to data from the Ministry of Science, ICT, and Future Planning, subscribers to MVNO providers account for 11.4% out of all subscribers to mobile carriers, which was 6.84 million as of December last year. This means roughly one person in ten is an MVNO customer.

First introduced in 2011, MVNOs are telecommunications service providers that lease access to network services and provide them to subscribers. The upside for consumers is that they can receive the same quality service with conventional carriers at a cheaper price. There are currently about 40 MVNO businesses in Korea.

The number of MVNO subscribers reaching 10% of all subscribers to mobile carriers may be the reason behind the slow growth. And this translates to a risk for MVNO carriers that cannot break away from their deficit.

The MVNO industry is seeking diverse ways to survive. The “Zero Plan” unveiled last year is a key example, along with the “50% off Plan” which gives a discount on the minimum charge when paid through a mobile contract plan.

Also, MVNOs are expanding distribution from traditional post offices to convenience stores and online markets, while diversifying the models of mobile phones for sale to top-notch phones such as the Samsung Galaxy S7 and LG V20.

As has been seen in the market, various efforts are taking place to boost the recent slowdown among MVNO carriers. As an official from the Green Consumer Network put it: “Self-help efforts and the government’s supportive measures are both crucial.”