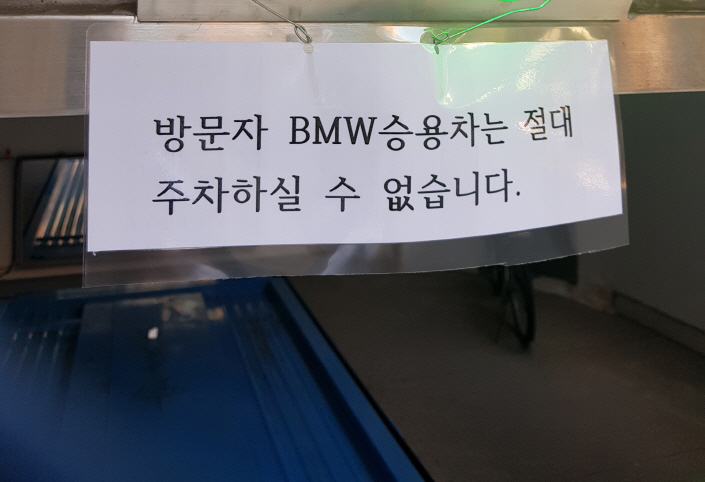 The building, mainly utilized as office space on floors 1 to 5, offers an automated parking service for cars in the basement.

The building’s management office said that it was informing users that BMW vehicles would not be accepted in the parking lot due to the recent spate of engine fires.

“If a BMW car catches on fire, it can spread to other cars within the parking lot,” noted the management.

One user who frequently parks his car at the building says that the move is a smart and preemptive one.

“I feel uncomfortable when I see a BMW 520d next to my car as I’m driving,” said the driver, who also wants the government to do something to protect the rights of citizens instead of relying on the German carmaker to take action.

On social media websites, users have uploaded postings that mention other parking lots that have put in place similar measures.

According to police, the engine on yet another BMW 520d caught on fire on the Yeongdong Expressway yesterday morning around 11:47 a.m. in Wonju, Gangwon Province.

On July 20, a 520d that was parked near a shopping arcade went up in flames in Seongnam, Gyeonggi Province.

BMW Korea has revealed that it is voluntarily recalling over 106,000 vehicles across 42 car models, including the BMW 520d, while performing emergency checkups on all of its 520d models.