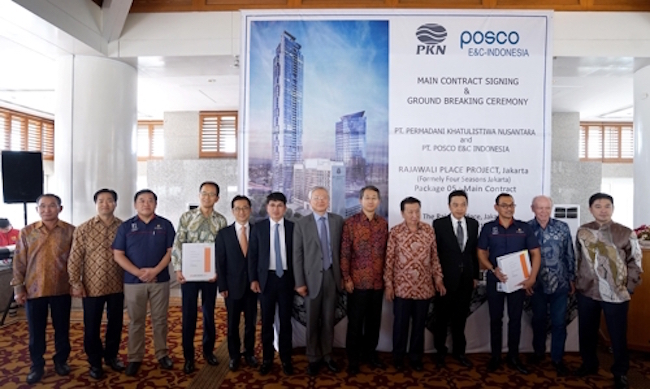 The construction arm of South Korea’s top steelmaker POSCO said the buildings will be constructed at a cost of about US$300 million. The buildings are scheduled to be completed by 2020.

Rajawali Corp., one of the largest Chinese-owned conglomerates in Indonesia, has placed the order to construct a 27-story hotel and a 55-story residence and office tower.

The groundbreaking ceremony was held in Jakarta on Wednesday with POSCO E&C President Han Chan-kun and other dignitaries attending.

POSCO E&C said that after successfully completing the construction project, it will seek to win an order to build a nearby sewage treatment facility and work with Rajawali in the coal-fired power plant and battery sectors.

The builder also said it will start construction on a commercial-residential complex of five 21-story high rises in a free economic zone in the Philippines, a 90-minute drive from Manila, on Wednesday. It marks the first overseas advance of its apartment brand, “The Shop.”

POSCO E&C has been ramping up efforts to boost its presence in fast developing Southeast Asian countries.