SEOUL, Sept. 25 (Korea Bizwire) — K-pop project group SuperM said Friday it hopes to deliver positive energy through its inaugural studio album “Super One” to fans during the difficult times of the pandemic.

“We’ve felt a lot of pressure from the great achievement we had from our debut album. We’d be satisfied if (fans) become encouraged through ‘Super One’ in these difficult times,” SuperM leader Baekyuun said during an online press conference Friday in Seoul for the group’s first studio album.

“We hope fans can take away positive and hope-filled energy (from the album).”

It made a strong debut in October last year, with the EP album “SuperM: The 1st Mini Album” topping the Billboard 200 albums chart in the U.S., becoming the second K-pop group to do so after BTS.

The seven-member act under SM Entertainment, released the 15-track studio album, which includes prereleased singles — “With You,” “100,” “Tiger Inside” and “One (Monster & Infinity)” — on Friday.

Noteworthy is the fact that the lead song “One” is a hybrid remix that amalgamates two tracks, “Monster” and “Infinity,” included in the album. 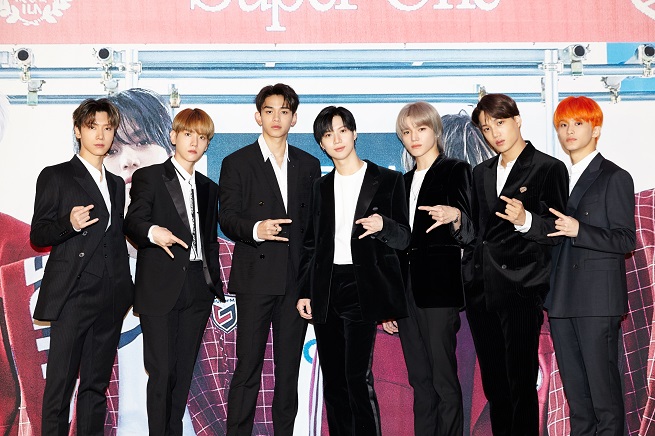 This photo provided by SM Entertainment on Sept. 25, 2020, shows K-pop group SuperM posing for a photo during a press conference for its new album “Super One” in Seoul.

The album was produced by various industry-leading songwriters, including SM’s in-house producers Yoo Young-jin and Kenzie, as well as international songwriting teams LDN Noise of Britain and Moonshine from Sweden.

SuperM members Taeyong and Mark also participated in the composing and lyrics too.

“The album contains a variety of genres of songs. We think our colors are finally starting to show. I hope you can check out what our colors are like,” Baekhyun said.

Member Kai said the singers, who come from different established acts, tried to emphasize unity in the process of making the album.

“Since it’s our first studio album, we wanted to present ourselves as coming together, since we’ve come from different teams. We also wanted to show our sense of hope,” Kai said.

SuperM presented its television debut performance of “One (Monster & Infinity)” on “The Ellen DeGeneres Show” in the United States on Wednesday.

“It was unfortunate we couldn’t be there to perform, but given it was our debut TV performance (for the song), we were really satisfied with the result, and the reaction was great,” member Ten said. 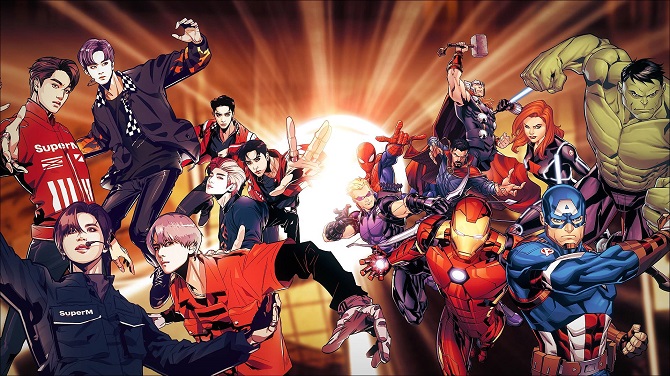 Alongside the album’s release, SM has struck a crossover merchandising project deal with Marvel Entertainment, the American entertainment company behind numerous superhero comic book-film properties, such as X-Men, Spider-Man and the Avengers.

“When we first debuted in America, producer Lee Soo-man introduced us as the ‘Avengers of K-pop.’ We found that fitting, and it’s an honor to actually be able to collaborate (with Marvel),” Mark said. Lee is the founder of SM.

SuperM members also said connecting with fans through its Beyond Live virtual concert back in April was a silver lining for the group at a time when international flights and overseas concerts have been canceled due to COVID-19.

“It was like video chatting with fans,” Baekhyun said.

“I thought only meeting up with fans in person would generate synergy, but online connections was advantageous as it allowed us to connect with fans in places where we would have otherwise not been able to visit.”