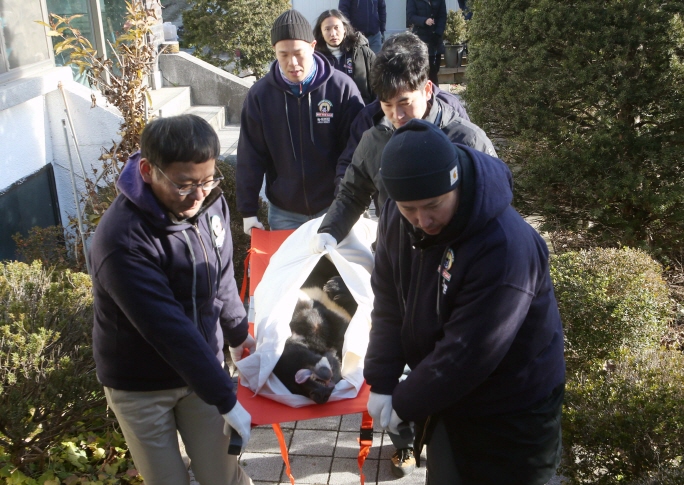 The anxious bears were anesthetized before they were brought out by Green Korea activists to be taken away for protection. (image: Yonhap)

The anxious bears were anesthetized before they were brought out by Green Korea activists to be taken away for protection.

It was a moment of freedom for the bears, marking an end to their four years in captivity since birth.

The bears were healthy, except for their feet, which were partially cracked due to long hours spent on hard cement floors.

Bani, Dali, and Gomi, the new names given to the three rescued bears, were taken aboard anti-vibration trucks to be sent to zoos in Cheongju and Jeonju.

These bears were to be caged for life, as their former owners waited to extract their bile, which is commonly used for medicinal purposes.

They were saved by 3,639 people, who participated in Green Korea’s online crowdfunding scheme to raise enough money to purchase the bears from the farm.

The Ministry of Environment agreed to provide support to renovate zoo facilities to accommodate the bears. In the meantime, the zoos have provided temporary residences for the bears.

Green Korea called this feat a “symbolic event in the eradication of the bear breeding industry.”

“It is our objective to send these bears to permanent protection facilities,” said Bae Jae-seon, head of Natural Ecology Team at Green Korea.

The three bears are descendants of Asiatic black bears imported from Russia based on a breeding policy that the South Korean government implemented back in 1981.

The government banned bear breeding in 2014, but there are still 540 bears caged for life, waiting for their bile to be extracted.

Green Korea plans to continue its campaign to protect these bears.