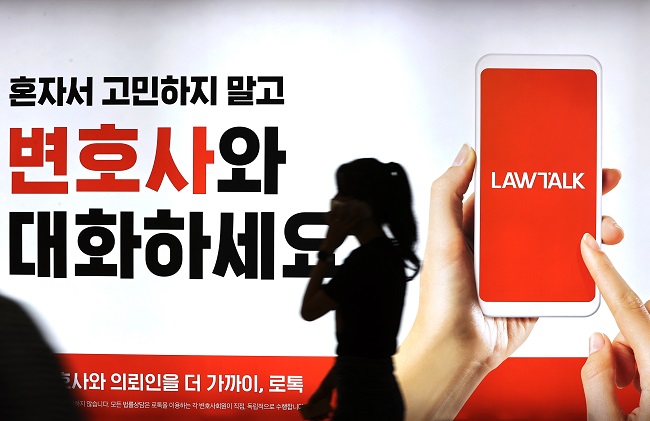 This image shows a promotional image for LawTalk. (Yonhap)

SEOUL, May 26 (Korea Bizwire) — The Constitutional Court ruled Thursday that the lawyers’ code of conduct banning them from joining online legal counseling platforms, such as LawTalk, is unconstitutional, a decision expected to bring sweeping changes to how law is practiced in South Korea.

The ruling is in favor of 60 lawyers and Law&Company, the operator of mobile legal service app LawTalk, who challenged the Korean Bar Association’s Code of Ethics for Attorneys for banning lawyers from joining LawTalk and other online legal service platforms.

Launched in 2014, LawTalk had rapidly grown to become a major online client-lawyer matching service and legal counseling provider for tech-savvy South Koreans, matching some 22,770 legal consultations as of March 2021.

It had once boasted the membership of some 4,000 lawyers, or over 10 percent of all registered lawyers.

The firm was dealt a blow, however, as the Korean Bar Association revised the lawyers’ code of conduct in May last year to prohibit lawyers from working for those online platforms, arguing they serve as a paid broker between lawyers and clients — an act prohibited under the country’s Attorney-at-Law Act.

The LawTalk operator and the 60 lawyers filed a petition against the revision with the Constitutional Court, saying it violates lawyers’ freedom of expression and occupation and the firm’s property rights.

At issue was a regulation of the bar association that lawyers cannot run online legal service advertisements that are not allowed in the association’s “authoritative interpretation” of the Attorney-at-Law Act.

The court ruled that such a vaguely worded regulation, which does not specify the content or means of advertisements under prohibition, significantly hinders the regulation’s predictability and can be subject to arbitrary application.

The Constitutional Court decision is expected to give a further boost to online platforms like LawTalk in the country’s legal services market worth over 6 trillion won (US$4.7 billion) as of 2019.