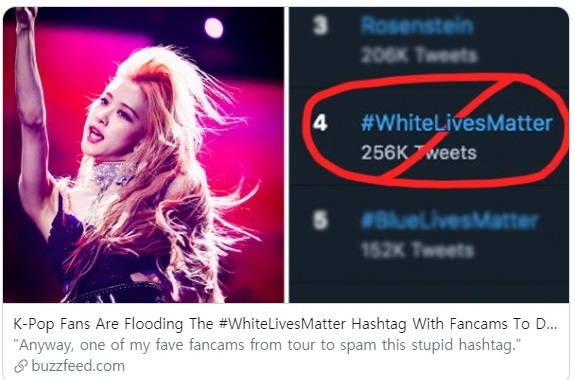 Hashtag hijacks led by K-pop fans have spread across multiple social media platforms including Instagram and others.

It all began on Wednesday, when white supremacists began using the hashtag #WhiteLivesMatter on Twitter to undermine the human rights movement that spread throughout the United States along with the hashtag #BlackLivesMatter following the death of George Floyd.

In response, K-pop fans teamed up to cover up Twitter feeds of white supremacist messages by using the hashtag with pictures or videos of K-pop stars and celebrities.

“Stop being racist. It is not right. Just go away looking at the photos of our celebrities,” one of the posts said. “Your lives will become much more peaceful once you realize that all humans are equal.”

One user on Twitter gleefully described this movement as ‘hashtag hijack’.

“There were no racist posts in the feed by the afternoon,” the user said. “K-pop fans did a great job hijacking those hashtags.”

Another Twitter user criticized racism by sharing a part of the speech given by BTS member RM at an event during the 73rd session of the U.N. General Assembly in New York in Sept. 24, 2018.

Hashtag hijacks led by K-pop fans have spread across multiple social media platforms including Instagram and others.

“K-pop fans have reclaimed the #WhiteLivesMatter from racists on both Twitter and Instagram, tagging posts of K-pop stars, in a display of global solidarity with those protesting for racial equality in the United States,” Forbes reported.

“K-pop fans from around the world – a massive force on social media – are acting as allies with Black Lives Matter,” Forbes added. “Other hashtags are being overwhelmed with pop music and peaceful content.”