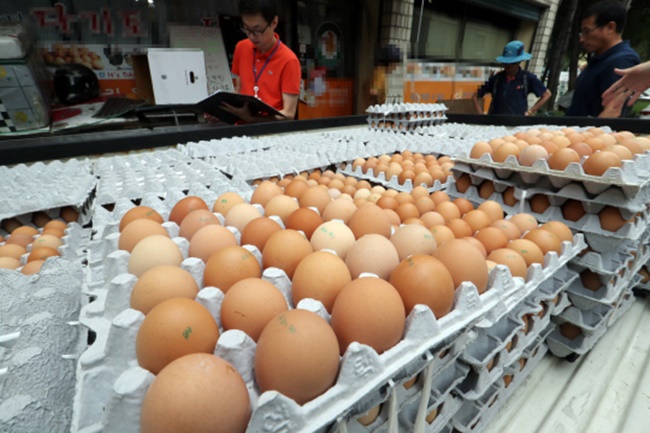 According to the Ministry of Agriculture, Food and Rural Affairs on Wednesday, six of the seven chicken farms where the use of controversial harmful pesticides including Piperonyl butoxide and bifenthrin was reported were found to have been certified by the government as environment-friendly facilities. (Image: Yonhap)

SEOUL, Aug. 17 (Korea Bizwire) – With the scandal surrounding eggs contaminated with harmful pesticides continuing to sweep South Korea, the long debated issues of controversial battery farms and poorly conducted environmental regulations are back in the spotlight.

As an increasing number of chicken farms involved in the egg contamination scandal have been found to be certified as environment-friendly during a government investigation, the blame is being shifted from health authorities to fundamental recurring issues such as the cruel living conditions in battery farms across the country, and loose environmental certification standards.

According to the Ministry of Agriculture, Food and Rural Affairs on Wednesday, six of the seven chicken farms where the use of controversial harmful pesticides including Piperonyl butoxide and bifenthrin was reported were found to have been certified by the government as environment-friendly facilities.

Reports that have emerged showing nearly 21 times the recommended amount of bifenthrin was used at one of the farms in question, despite being approved by the government as ‘environment-friendly’, have since provoked a public outcry.

“It leaves me speechless how a supposed ‘environment-friendly’ farm has been found to use 21 times the recommended amount of pesticides. I wonder who will be able to trust the eco-friendly logo from now on,” Ann, a housewife from Gyeonggi Province who is in her mid-30s, said in frustration.

The eco-friendly logo on agricultural produce packages has generally been accepted as a sign of safety and friendliness to the environment as it claims, but it was revealed during a government-backed investigation into the recent egg contamination scandal that pesticides banned for such products have been used, misleading the public as a result.

Consumer watchdogs argue the problem lies with the private companies that do a shoddy job of conducting environmental certification on behalf of the National Agricultural Products Quality Management Service, a government-owned institute previously responsible for the task that now only oversees the private certification issuers.

In 2013, members of the private institutions responsible for environment regulations were caught issuing certifications for their own agricultural products and other incidents of misconduct.

A lack of effort to improve the cruel living conditions at battery cage farms is also thought to be one of the major contributing factors behind the latest egg contamination scandal, with each chicken allotted a space smaller than an A4-sized sheet of paper.

In battery cages, it is extremely difficult to get rid of chicken mites in an eco-friendly way, which means South Korean poultry farmers often end up spraying pesticides in a confined space jam-packed with birds, a practice which experts warn can lead to eggs contaminated with harmful pesticides.

Though new measures were put in place by the government in April following the avian influenza pandemic, the lack of support and progress, especially when compared to farming practices in other developed countries, have resulted in criticism and disappointment among the public and animal groups. 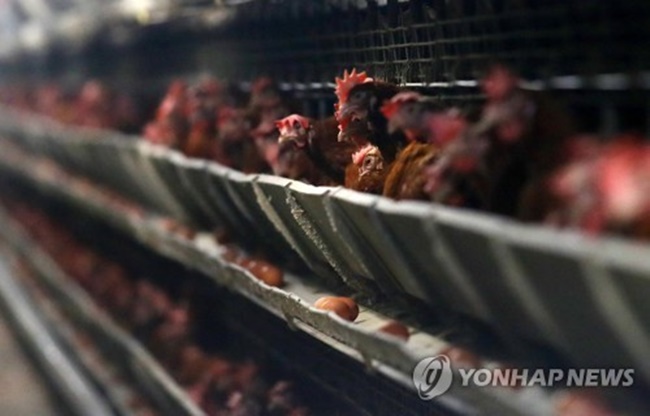 With the scandal surrounding eggs contaminated with harmful pesticides continuing to sweep South Korea, the long debated issues of controversial battery farms and poorly conducted environmental regulations are back in the spotlight. (Image: Yonhap)

In 2003, the EU banned the new construction of the so-called battery cages, a term that refers to small wire cages in which hens spend their entire lives with little to no space to move around. Since a total ban on battery cages took place in 2012, an increasing number of farmers have adopted free-range farming.

South Korean poultry farms however, have been bucking the trend and engaging in activities that border on animal cruelty, such as keeping the lights on during the night to maximize egg production, exploiting a physiological phenomenon in which a drastic environmental change suddenly increases the egg production of hens.

Some observers claim that more needs to be done to encourage free-range farming in order to tackle repeated issues that stem from the poor living conditions in battery cages.