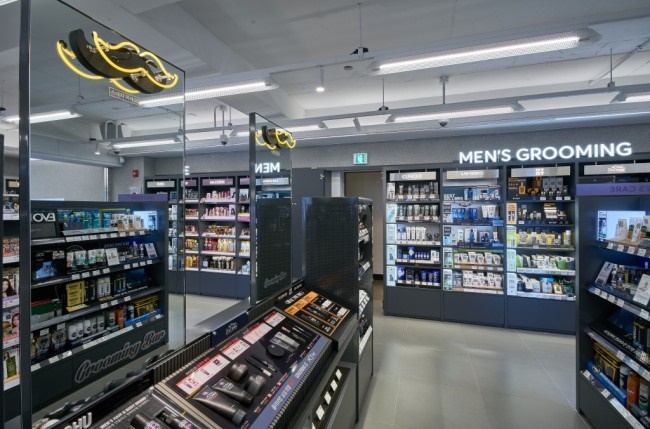 According to recent data from health and beauty store Olive Young, sales of beauty products and technical underwear for male consumers increased by 160 percent during the first three weeks of November compared to the same time last year.

In the past, triple-blade razors and multiple-direction electric shavers were among the top sellers, but recent trends have seen sales of more versatile items increase, including products with better design and better portability.

Razors from Evo Shave are among the new items being sold at Olive Young stores.

Since the British company’s first foray into the Asian market via South Korea, the trendy razor maker has gained popularity for its portable products that can be used by the force of one’s fingers rather than the arm, allowing for more precise shaving.

Thanks to their useful and creative features, sales of Evo Shave’s products nearly tripled over the last month.

Shave Doctor is another company hailed as a soon-to-be hit thanks to its NEO razor, which dispenses shaving foam on its own through the razor blades for a complete shaving system.

Sales of male cleansers have also risen, including products from brands like Dashu, Jaekeullin, and Label Young, which Olive Young began selling in April this year.

Available in various forms ranging from mists to creams, sales of male cleansers are increasing by an average 20 percent every month, breaking the stereotype that gender-specific cleansers are only for women.

Technical underwear is also proving popular among male consumers, as it helps to flatter by tightening or giving support to certain physical features.

Neobody, which began as an online hit item, is now on sale at Olive Young stores, reflecting the growing interest in male beauty products among South Korean consumers.

At one location in Gangnam, sales of male technical underwear have been on a par with those of razors from major brands, with the main consumers being men in their 20s and 30s.

“We are planning to cater to the rapidly changing trends among male consumers by developing and introducing a wide range of creative items,” an Olive Young official said.