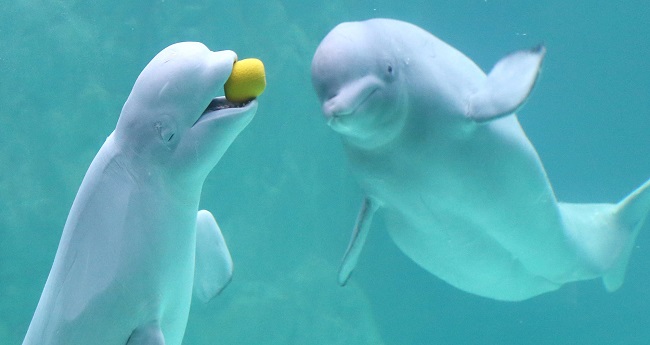 Belugas are easily tamed and keep calm even when facing difficult situations. (Yonhap)

SEOUL, July 27 (Korea Bizwire) — Belugas, or white whales, feature a white body, a round forehead, and a cute smiling face.

Belugas are known to be highly intelligent, enough to find and return a mobile phone that fell into the water to the owner. Belugas are easily tamed and keep calm even when facing difficult situations.

The whales, however, are suffering pain due to their cute appearance and high intelligence. Zoos and aquariums in various countries are abusing belugas for money-making purposes since they can easily be tamed.

South Korea is not an exception. The nation’s large aquariums are using belugas as their mascots, with one facility running a program that offer participants beluga rides.

In 2016, one of the three belugas at the aquarium at Lotte World in Seoul died due to blood poisoning.

One of the two belugas remaining died last year, with the final remaining one showing abnormal behaviors.

Belugas have a maximum body length of roughly 4.5 meters and a weight of 1.5 tons. The scope of their movement is extensive enough to cover the Arctic Ocean, the Bering Sea, the northern coastal area of Canada and Greenland. 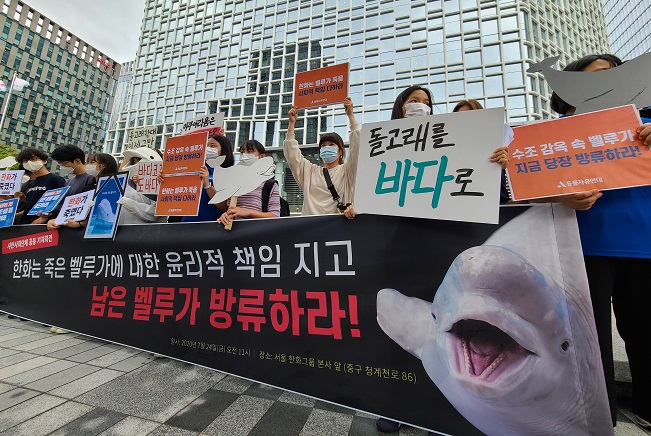 Animal right groups are calling for the Ministry of Oceans and Fisheries to instantly establish plans to set the remaining belugas free.
(Yonhap)

Animal right activists claim that confining the whales to small water tanks is fatal and against the basic nature of belugas.

After one of three belugas at the Aqua Planet Yeosu, one of South Korea’s largest aquariums, died due to blood poisoning on July 20, animal right groups are calling for the Ministry of Oceans and Fisheries to instantly establish plans to set the remaining belugas free.

Even in international communities, voices are growing against the practice of keeping whales in captivity, including belugas.

Facing international pressure, Russia finally released the whales it kept in small enclosures for the purposes of selling to marine parks or aquariums.

According to Hot Pink Dolphins, an organization established to protect the marine environment, as many as 31 whales were being kept in captivity in South Korea as of July.