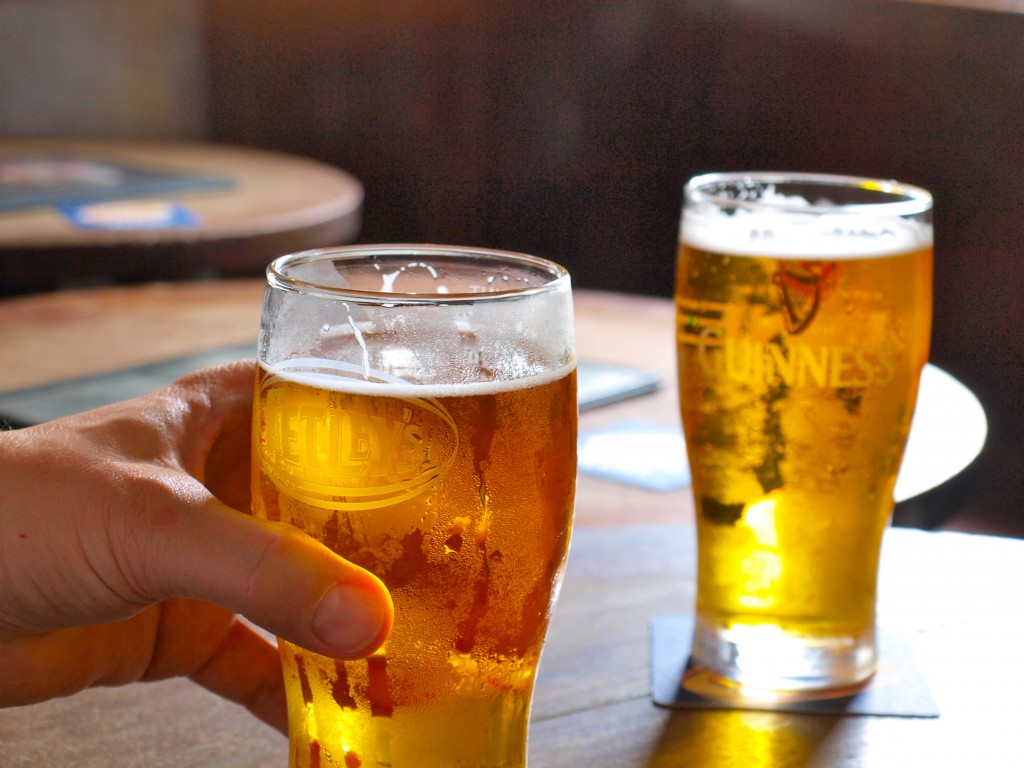 Driven by Big Alcohol advertising, branding, sponsorship and celebrity endorsements, America consumes an estimated 325 million gallons of beer on the day of the big game, so alcohol-related harm is inevitable. (image: Pints of Beer by Simon Cocks@flickr)

SAN FRANCISCO, Jan. 30, 2014 (Korea Bizwire) – With the Big Game approaching this Sunday, it’s time to assess how huge a boost for the alcohol industry it really is.

“Big Alcohol in big sports is big business and very harmful to society, its youth, public health and safety,” stated Alcohol Justice’s Executive Director and CEO Bruce Lee Livingston. “While Big Alcohol’s ‘game plan’ includes patent lies that there is no evidence that exposure to alcohol ads encourages underage consumption or harmful over-consumption among adults, the opposite is actually true.”

Researchers across the world have arrived at the conclusion nicely summed up in an article in The Conversation by Kerry O’Brien Head of Behavioural Studies at Monash University in Australia last February when he stated: “exposure to, and/or recall of, alcohol advertising and sponsorship by children and adolescents predicts their future drinking expectancies, norms, drinking intentions, and hazardous drinking behaviours.”

In a New Year’s open invitation this year Livingston invited the world to join Alcohol Justice to challenge the NFL, NBA, MLB, FIFA, the Olympics and all other professional and amateur sports associations worldwide to end alcohol branding, sponsorship, ads, and celebrity endorsements

AS YOU WATCH THE BIG GAME THIS SUNDAY, THINK ABOUT THIS

Just two global beer behemoths – Anheuser-Busch InBev and SABMiller – invest roughly half a billion dollars annually on TV ads during sporting events in the U.S. Would these profit-thirsty, bottom-line driven corporations waste their dollars? It really only proves they get the ROI they want…increased alcohol sales and consumption. Unfortunately this leads to a public health and safety ROI that has become unacceptable.

Driven by Big Alcohol advertising, branding, sponsorship and celebrity endorsements, America consumes an estimated 325 million gallons of beer on the day of the big game, so alcohol-related harm is inevitable.  Throughout the year, sports related alcohol over-consumption leads directly to tens of thousands of incidents of alcohol-related violence and harm.

As Super Bowl XLVIII unfolds – dare we speak its name? – it is estimated that about 20 to 30 million kids will tune in to watch on TV and online. As usual, they will be saturated once again with seductive beer ads.

Research has shown that the more alcohol ads kids see, the more likely they are to drink, drink to excess, and drink more often. In 2009, the Surgeon General’s Call to Action to Prevent and Reduce Underage Drinking reported that 5,000 people under age 21 die annually from alcohol-related injuries. Hundreds of thousands more suffer alcohol-fueled sexual assaults, serious injuries, diseases, and academic failure.

Over the past five years Alcohol Justice has used its youth video contests (FREE THE BOWL & FREE OUR SPORTS) to send a message to Big Alcohol and professional sports telling them that ALCOHOL AND SPORTS ARE A BAD COMBINATION. It’s gratifying for us to know that we’re not the only ones who find sports alcohol ads, sponsorships, and celebrity endorsements disturbing.

Two of smartest, most popular TV personalities in the country also believe that there’s something wrong with mixing alcohol and sports. Jon Stewart on “The Daily Show” recently skewered booze-swilling pot critics http://bit.ly/1e8OYll and questioned excessive beer ads on TV sports. While Steven Colbert on “The Colbert Report” commented on lucrative NFL sponsorships and Peyton Manning’s recent “shout-out” for Bud Light http://bit.ly/1dBo0kz “What’s weighing on my mind is how soon I can get a Bud Light in my mouth after this win. That’s priority number 1,” stated Manning. ”Really Peyton?” asked Michael Scippa, Director of Public Affairs for Alcohol Justice. “Do you think thousands of 10 year-old kids need to hear that? How much did they pay you to plant that seed?”

Alcohol ads, sponsorships, and celebrity endorsements associated with sports are disturbing not just because they are designed to lure young people to take that first drink but because as Kerry O’Brien said “…they also cleverly create a culture where kids perceive alcohol consumption as a normal everyday part of life. And they see it as something associated with sporting success.”

“But we know better than that and nothing could be further from the truth,” added Scippa. “And recent news stories of various professional sports stars’ sometimes-tragic DUI encounters like Josh Brent, Erin Henderson, and Bruce Smith, to name just a few, are proof that alcohol and sports success are a bad match as well.” 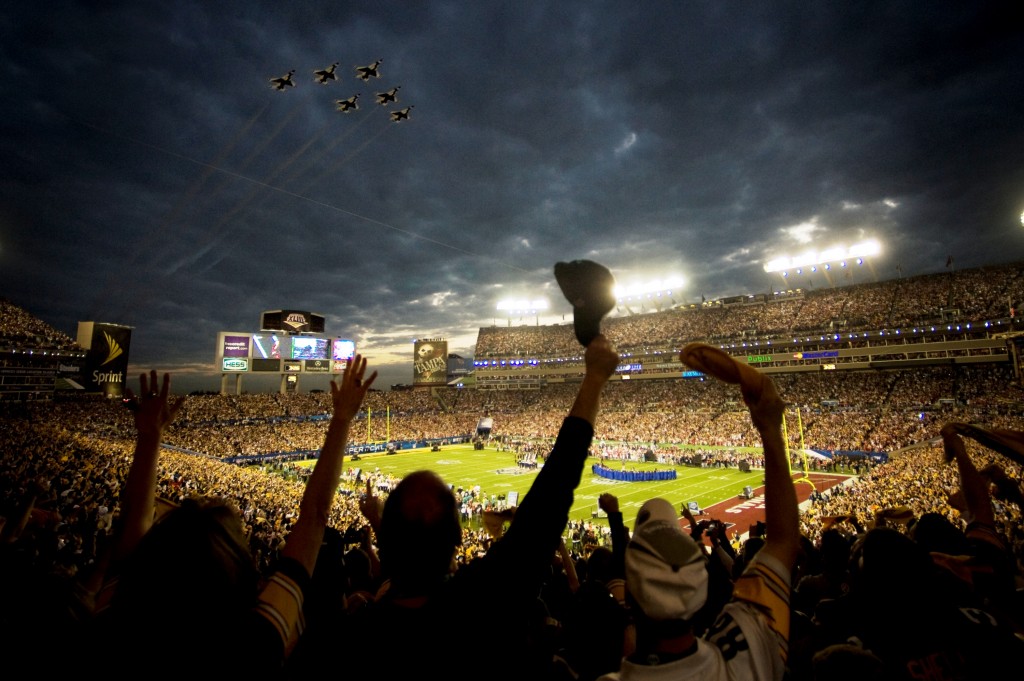 A University of Minnesota study found equally massive alcohol-over consumption during pre-game tailgating and in the stadiums, which produce a conservatively estimated 5,000 legally drunk fans at every NFL game. (image: Wikipedia)

SPORTS CAN SURVIVE WITHOUT ALCOHOL

In the same Monash University article previously mentioned, O’Brien noted “France has had a complete ban on alcohol advertising and sponsorship since 1991. Sport has not suffered and alcohol consumption has decreased in the past 20-odd years. Indeed, France even hosted the 1998 FIFA World Cup with this ban in place and enforced.”

This outcome, though positive for French public health and safety, clearly did not sit well with FIFA and their biggest alcohol industry partner – Anheuser-Busch InBev. As the World Cup prepared to move to Brazil in 2014, FIFA demanded that the sovereign nation change its 2003 law banning alcohol sales in sports stadiums, to effectively force the sale of alcohol at World Cup matches. In spite of a widespread global outcry over this attempt to dictate the reversal of public-safety laws, FIFA succeeded, in the name of increased profits for itself and one of its main sponsors, Anheuser-Busch InBev. “FIFA wants to have powers in Brazil which it is not entitled to, as a private company,” stated federal congressman and former World Cup-winning striker Romario de Souza Faria.

“That’s far too high a price to pay for a game,” said David Sirota, best-selling author of the books “Hostile Takeover,” “The Uprising” and “Back to Our Future” in an article he wrote last October entitled The NFL Symbolizes Economic Unfairness in America. But he was talking about American football and the NFL and referring to the fact that Big Alcohol’s BFF – the NFL – enjoys billions in tax-free profits while raking in massive public subsidies for stadiums, infrastructure improvements and operating utilities. He cited Harvard University data showing that “70 percent of the capital cost of NFL stadiums has been provided by taxpayers, not NFL owners.”

A University of Minnesota study found equally massive alcohol-over consumption during pre-game tailgating and in the stadiums, which produce a conservatively estimated 5,000 legally drunk fans at every NFL game.  They in turn are responsible for game-day alcohol-related harm, like violent beatings, stabbings and vehicle crashes that local police, EMT and ER personnel must respond to at public cost.

THE ONLY GAME PLAN THAT WORKS: TAKE ALCOHOL OUT OF SPORTS

David Pease, a former Miami Dolphins executive stated in a recent TCPalm article, “With recent significant increases in the rights fees charged the sports networks, especially by the NFL, we can expect more costly and likely more total units of alcohol commercials to air as the networks endeavor to recoup their inflated rights fee investments.”

Pease, who lost two sons to alcohol and drug misuse, is now a prevention advocate who believes much of our prevention infrastructure and outreach has been either dismantled, cut back or defunded in recent years. He observes that the operative sports business model places the growth of football and basketball revenues before the growth of the adolescent brain in America with the unintended consequences being lethal to adolescent brain axons.

“We need to muster the will and the courage to hold the NFL’s, the NBA’s and the NCAA’s collective and respective feet to the fire to more responsibly monitor this underreported, “unintended” spillover,” Pease said. “Regardless of the inevitable pushback, we owe it to our kids to intervene. After all, we got them involved in sports in the first place.”

“The only game plan that will work is to eliminate global alcohol advertising, sponsorships, branding and promotions from every sport, from college games to the NFL championship, from the World Series to the World Cup and Olympics,” Livingston concluded. “And it’s time to end the non-profit status of the NFL and the unfair public subsidies the billionaire team owners enjoy.”