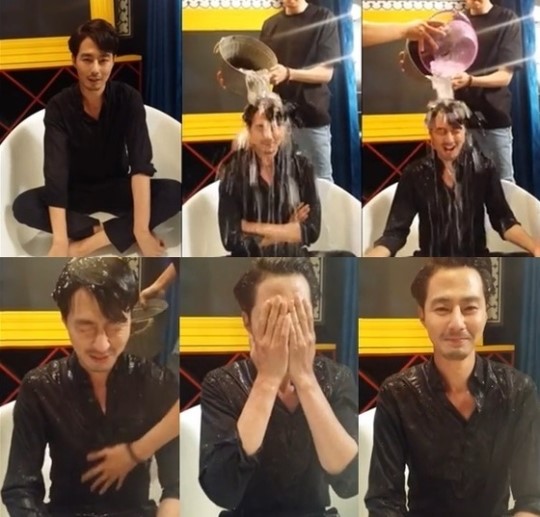 “It is an honor to participate in such a good-hearted campaign. I hope that the campaign will not only help those who suffer from ALS, but also anyone who is hurt inside and outside.” (image: IOK Entertainment Youtube Capture)

SEOUL, Aug. 21 (Korea Bizwire) — The rapidly spreading social philanthropic movement, “Ice Bucket Challenge” hits South Korea and is daring some of the most famous celebrities and sports stars to take the challenge and participate in its goodwill.

One of the most-favored actors of Koreans, Cho In-Sung, posted an video of him getting a bucket of ice water dumped on his head, through his talent agency’s YouTube channel on August 18 and the posting quickly went viral.

In the video, the actor said, “It is an honor to participate in such a good-hearted campaign. I hope that the campaign will not only help those who suffer from ALS, but also anyone who is hurt inside and outside.”

Many other Korean celebrities are participating in the campaign as well: Son Heung-Min, Bayer Leverkusen and Korean National Soccer team superstar, also posted a video of him taking the challenge, and an actor and a well-liked member of the popular TV show Running Man, Lee Kwang-Soo, who was in fact mentioned by Cho, took upon the challenge as well.

The Ice Bucket Challenge is an activity involving dumping a bucket of ice water on one’s head or donating to the ALS — also known as Lou Gehrig’s disease – Association in the United States. The challenge dares nominated participants to be filmed having a bucket of ice water poured on their heads. A common stipulation is that nominated people have 24 hours to comply or forfeit by way of a charitable financial donation to the association, but most of the participants have done both.

The campaign went extremely viral as a flood of celebrities, CEOs, and sports stars including Bill Gates, Facebook CEO Mark Zuckerburg, Justin Timberlake and many more engaged in the challenge. Lebron James and Justin Bieber also participated last month and both have challenged President Obama of the Unites States.

The success of the campaign led to record donations to the ALS Association, raising some US$15.6 million in contributions to the group and its national affiliates since July 29. The association had raised just $50,000 in the same period last year.

Despite a few opinions that the challenge tarnishes the true meaning of philanthropy and is more like a show-off, the campaign is spreading worldwide at a breakneck speed and much of attention has been toward who will be the next big name in Korea to partake in the challenge and how much contribution will be made.