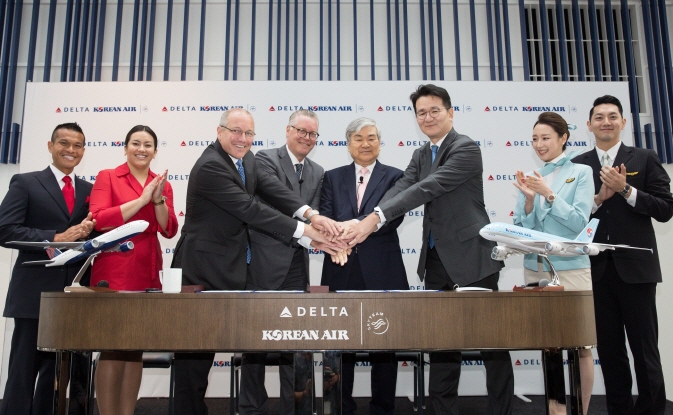 Delta didn’t provide how much it spent on the purchase, but the industry sources estimated it at about US$90 million according to current market prices.

The advent of Delta Air Lines on the battlefield between Hanjin KAL and the Korea Corporate Governance Improvement (KCGI) is a dramatic tweak and could not come at a better time for Hanjin Group, the country’s 14th-largest conglomerate.

Delta and Korean Air already have close business ties. They formed a joint venture last year, which connects over 290 U.S. destinations and over 80 in Asia.

“Delta’s stake purchase is expected to help Korean Air defend its management rights” against any attacks of activist hedge funds, such as the KCGI,” a Korean Air official said over the phone.

Delta will play as a friendly force for Hanjin KAL and Korean Air, according to analysts.

“As the U.S. airline market is saturated, Delta has invested in stakes of Asian airlines to continue to seek growth. Delta’s investment in Korean Air appears to be aimed at helping the partner focus on businesses (with stable management rights),” Um Kyung-a, an analyst at Shinyoung Securities Co., said.

With Delta’s investment, KCGI, which now owns a 15.98 percent stake in Hanjin KAL, may face an uphill battle over bringing changes to the logistics-centered business group, according to the sources.

Hanjin KAL’s board named late Chairman Cho Yang-ho’s only son, Won-tae, as new chairman in April following his father’s death. Hanjin KAL said it will respond to the move according to legal procedures.

The Cho family and other relatives together hold a 28.93 percent stake, including 17.84 percent held by the late chairman, in Hanjin KAL. The National Pension Service owns a 7.34 percent stake in the firm.

In a statement released Friday, KCGI said that if the purpose of Delta’s investment decision is only to help protect the Hanjin Group founding family’s management rights, it runs against Delta’s honor and principles that it has established over a long time.

The homegrown fund asked for a meeting with the Delta CEO to join forces with each other to monitor Hanjin’s efforts to enhance its governance structure.

“Some of the investors who betted on a battle with activist funds like KCGI appear to be selling the airline stocks. As Delta said it will increase its investment in Hanjin KAL, they are offloading the stocks on profit taking,” Um said.