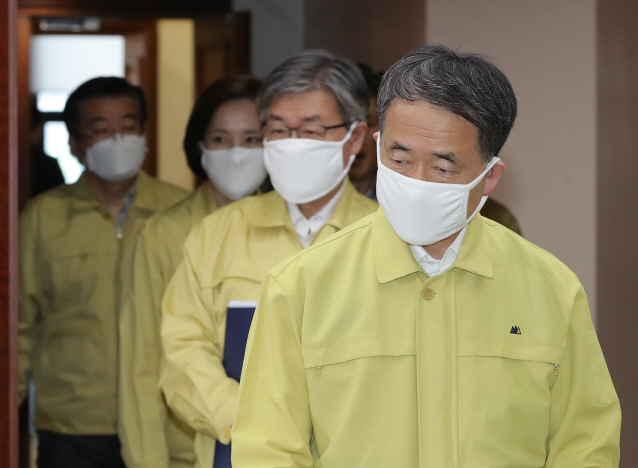 Minister of Health and Welfare Park Neung-hoo (front) walks into a conference room for a government meeting on responding to the coronavirus outbreak, held at the government office complex in Seoul, on March 22, 2020. (Yonhap)

SEOUL, March 22 (Korea Bizwire) — The South Korean government announced Sunday a set of tough “social distancing” measures for civil servants, employees of public organizations and soldiers nationwide, kicking off a two-week intensive campaign against the spread of the coronavirus.

The guidelines call for the expansion of telecommuting among public officials, flexible working hours and restrictions on after-work activities out of home.

At work, they are required to minimize face-to-face meetings or briefings and business trips abroad.

The foreign ministry will refrain from holding events for foreign diplomats here and ask them to join the social distancing drive.

In particular, it plans to send official letters to 136 foreign diplomatic missions and international organization offices in South Korea requesting the postponement or cancellation of formal receptions and other public events, if possible.

The justice ministry will curtail the transfer of inmates.

The transport ministry is introducing the “top-notch quarantine system” for public transit services, in which the passenger seats of KTX bullet trains will be separated, amid a continued curfew and restrictions on leave for active-duty troops.

The measures apply not only to central government workers but also to those at local authorities and other public organizations.

In addition, the operation of all public libraries, museums, concert halls and other facilities run by the government will be suspended.

The move shows the public sector coming to the fore in the social distancing campaign.

“The government will use all available maximum measures for strong support of social distancing for 15 days (from Sunday), making all-out efforts to curb community spread of COVID-19 infections,” Minister of Health and Welfare Park Neung-hoo said at a press briefing after an Interagency session of the Central Disaster Safety Countermeasures Headquarters.

The government, meanwhile, has decided to replace daily press briefings on additional coronavirus cases and its response with online ones starting on Monday.

It has provided media with briefings twice a day, one at the government office complex in the administrative town of Sejong, 130 kilometers south of Seoul, and the other at the Korea Centers for Disease Control and Prevention (KCDC) in the nearby town of Osong.

But reporters won’t be allowed to enter briefing rooms until April 5. They will be able to ask questions via Kakao Talk messenger, an official said.