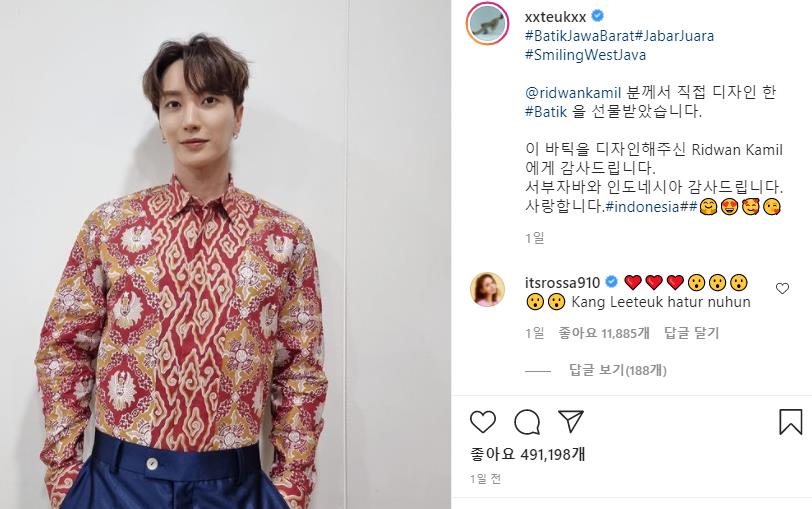 This photo capture from an Instagram account shows Leeteuk, a member of the boy band Super Junior, wearing a batik shirt. (Yonhap)

The garments were designed and made by Ridwan Kamil, governor of Indonesia’s West Java province, and were presented to the members with a hand-written letter.

“Super Junior is the first to complete the style of wearing two kinds of batik at once. Putting on a batik jacket over a batik shirt has never been attempted before,” Ridwan said.

“Their attempt to tuck the batik shirt into their pants was also very innovative.”

Batik refers to symbols or fabric made in Indonesia featured by its geometrical design using beeswax.

Ridwan, in a meeting with South Korean Ambassador to Indonesia Park Tae-sung last March, expressed his wish to present the batik to a Korean celebrity.

“Thank you for wearing West Java batik which I designed myself. Enjoy our gift, and success to you,” Ridwan said in his letter hand-written in English and Korean.

He went so far as to request his original letter written in Indonesian be translated into Korean, and transcribed it in a new letter.

“Diplomacy doesn’t always have to be formal. Super Junior wearing my batik is a classic example of that,” Ridwan said.