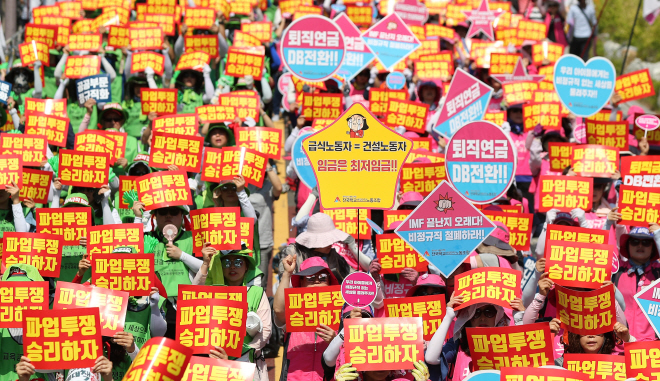 Non-regular workers at schools hold a rally in central Seoul on July 5, 2019, to call for the abolishment of non-regular jobs in the public sector. (Yonhap)

SEOUL, Jul. 10 (Korea Bizwire) – The latest strikes by non-regular workers in the public sector have put the Moon Jae-in government’s labor policy — including his iconic pledge on minimum wage hikes — to the test, experts say.

Moon took office in May 2017 with a pledge to build a society that abides by labor standards and guarantees workers’ rights.

In his key labor pledges, Moon vowed to switch the status of non-regular workers in the public sector to that of regular employees and raise the minimum wage to 10,000 won (US$8.47) per hour by 2020.

But the labor sector, which once vehemently supported the Moon government, has turned its back, claiming that Moon is not keeping his labor-friendly election pledges.

The latest joint protest by non-regular workers in the public sector reflected their frustration and anger at the government.

“Switching all non-regular posts in the public sector to regular ones is actually an unachievable goal. The government raised anticipation too high, drawing dissatisfaction from non-regular workers,” said Park Ji-soon, a professor at Korea University Law School.

Tens of thousands of such workers nationwide staged a three-day strike last week, calling for pay raises and the transition of their status to that of regular workers.

The bulk of the protesters were non-regular school workers, including cafeteria cooks and after-school daycare service assistants. Their stoppage resulted in a suspension of school lunch services.

Unionized postal workers had threatened to stage the first-ever nationwide strike on Tuesday. But they withdrew the plan at the last minute, avoiding potential disruption of postal and delivery services.

The Korean Confederation of Trade Unions (KCTU), a major umbrella labor union group, meanwhile, warned of a general strike set for July 18 to protest what it calls the government’s suppression of the labor sector.

“The gap between regular workers and non-regular employees has deepened, though Moon has pledged to abolish non-regular job posts,” KCTU chief Kim Myeong-hwan, who was released on conditional bail following an arrest, said at the scene of the strike last week.

The president pledged to create hundreds of thousands of quality jobs in the public sector and vowed to turn all non-regular public job posts into regular, full-time positions during his five-year term.

But in reality, public firms are hiring contract workers on unlimited terms or switching non-regular workers to regular posts by sending them to affiliate companies. Their working conditions have not markedly improved.

“The issue of switching non-regular workers is a structural social problem that needs a comprehensive approach. The government has given the wrong message to the labor circle that it can resolve the issue quickly,” said Kwon Hyuk, a professor at Pusan National University Law School. 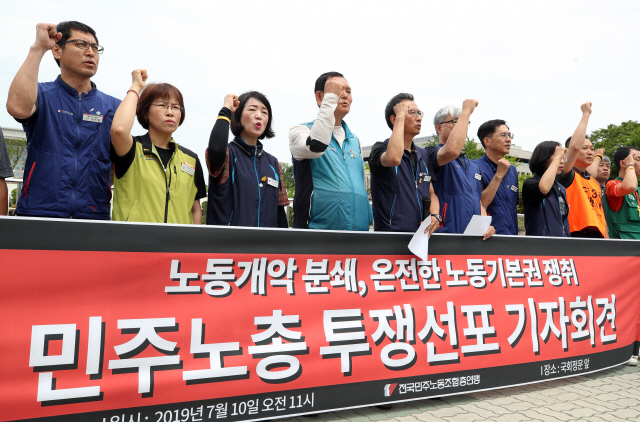 Members of the Korean Confederation of Trade Unions, a major umbrella labor union group, hold a rally in front of the National Assembly on July 10, 2019, to announce its campaign against what it calls the government’s suppression of the labor sector. (Yonhap)

The latest row over the minimum wage for 2020 may herald another flash point surrounding tensions with the labor sector.

Moon earlier pledged to raise the hourly pay to 10,000 won by next year but has signaled some flexibility amid a backlash from smaller firms and merchants over mounting labor costs.

The minimum wage is widely expected to be set below the target figure next year amid an economic slowdown and tepid job growth.

Labor claimed the government is yielding to the business sector. It said a move to expand the scope of things taken into account when calculating the minimum wage watered down the effect of the raises.

There are no signs government-labor relations will recover in the short term. The operation of the social dialogue council on labor is in limbo due mainly to a boycott by labor representatives.

The government may also face some challenges when it expands the shorter workweek to smaller firms next year and seeks parliamentary ratification of key international labor conventions.

Experts said the government needs to carve out a sustainable labor policy that can be implemented in the longer term.

“The government has failed to suggest a roadmap in dealing with the issue of non-regular workers,” professor Park said.

“It needs to be candid and specific about what it can and cannot do when implementing labor policy. It also should explore a flexible and comprehensive approach to spurring labor reform.”