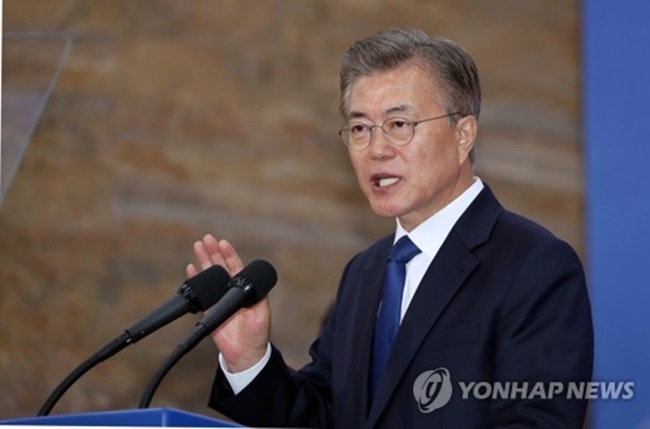 Goldman Sachs also said in a report that Moon is likely to raise taxes, noting he has advocated priority spending of 35.6 trillion won per year — which is 2.2 percent of the 2016 GDP — mostly on job creation and welfare spending through spending cut in other areas and more tax revenues. (Image: Yonhap)

Steffen Dyck, senior credit officer at Moody’s, said there might be a  shift in focus in sme structural reform areas, such as labor markets and social security.

“We expect that fiscal policies will remain anchored and guided by the principles of limiting deficits to 3 percent of gross domestic product and keeping government debt below 45 percent of GDP,” Dyck said in a commentary on South Korea’s presidential election.

He also said South Korea has and will retain ample fiscal space to support the economy in the face of potential negative shocks.

During the campaign, Moon vowed to map out a supplementary budget in a way to accelerate the upside impetus further in addition to the 2017 budget worth 400.5 trillion won (US$354 billion).

Global investment giant Goldman Sachs said it expects a modest supplementary budget of less than 1 percent of the GDP.

Goldman Sachs also said in a report that Moon is likely to raise taxes, noting he has advocated priority spending of 35.6 trillion won per year — which is 2.2 percent of the 2016 GDP — mostly on job creation and welfare spending through spending cut in other areas and more tax revenues.

Dyck said Moon’s election clears uncertainty that may have arisen from the political transition following the ouster of then President Park Geun-hye over a corruption scandal.

In February, Moody’s kept its rating on South Korea at a record high of Aa2, with a stable rating outlook. Aa2 is the third-highest rating on the credit table, with only six other countries out of the Group of 20 advanced and developing nations currently holding that rating.

Household debt, which stood at 1,344 trillion won at the end of last year, has been cited as one of the key vulnerabilities facing Asia’s fourth-largest economy.

He also said geopolitical tensions continue to pose the most salient event risk for South Korea and are a key constraint on the sovereign’s credit profile, though he said Moody’s maintains its view that the probability of a military conflict with North Korea remains very low.

“We will continue to monitor the implications of any shift in Korea’s stance vis-a-vis North Korea for the probability of a conflict,” Dyck said.

“The new president’s policy stance may alter the nature of geopolitical relationships and risks in the peninsula.”

On the campaign trail, Moon vowed to seek a dual-track approach of pushing North Korea’s denuclearization and dialogue with Pyongyang.

Tensions persist on the Korean Peninsula over the North’s nuclear and missile programs.

Goldman Sachs said it expects South Korea to continue to coordinate with the U.S. and other regional powers on North Korea policy.