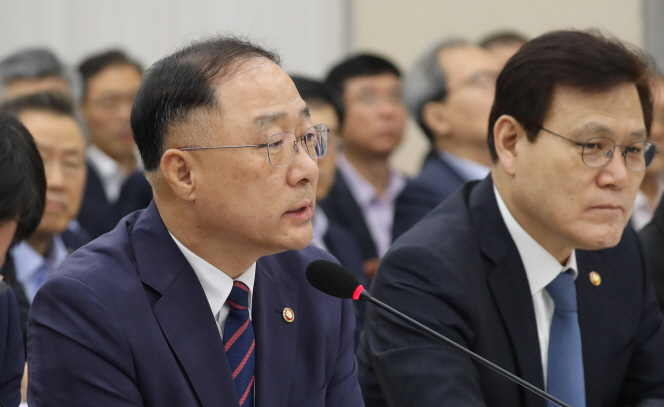 Moon named Hong Nam-ki, an economic technocrat who is currently serving as chief of the Office for Government Policy Coordination under the Prime Minister’s Office, to replace Kim Dong-yeon as finance minister and deputy prime minister for economic affairs, Cheong Wa Dae said.

Kim and Jang have publicly displayed wide differences over how to revitalize the sluggish economy, with Kim voicing a need to alter the “income-led” growth policy and Jang insisting on sticking to the distribution-centered policy.

Their replacement was seen in part as aimed at revamping the economic team as they failed to produce tangible results in revitalizing Asia’s fourth-largest economy. Their sacking was also seen as a measure to hold them responsible for failing to work in concert with each other.

Noh Hyeong-ouk, Hong’s deputy, was named to succeed Hong as chief of the Office for Government Policy Coordination, while Kim Yeon-myung, a social welfare professor at Seoul’s Chung-Ang University, was tapped to be the new senior social affairs secretary.

“Nominee Hong is an economic technocrat known as an expert in budget and public finances,” Yoon Young-chan, senior presidential press secretary, told reporters. “He has good understanding of national tasks … and is an economic expert equipped with broad administrative experiences and capabilities to implement and coordinate policies.”

Hong is the “top official to assume the government’s economic control tower at a time when vitality needs to be breathed into the economy in a speedy manner through the implementation of innovative and bold policy,” Yoon said.

“As the economic control tower, he is expected to deal actively with issues related to the livelihoods of ordinary people and manage economic policy in the direction of realizing an inclusive nation through the implementation of key economic policies, such as income-led growth and a fair economy,” he said.

Officials said Hong will be the sole top economic policymaker.

Hong entered the government after passing the high-level civil service exam in 1986 and is considered an expert in budgetary issues. After serving in various positions at the finance ministry, Hong served as vice minister of the Ministry of Science, ICT and Future under the administration of President Park Geun-hye.

Hong said that structural reforms will be one of his top priorities.

“If I take over this duty following a confirmation hearing, I will concentrate on providing vitality to our economy. As you know, our economy is at a structural turning point. If we’re going to realize sustainable growth, we should carry out structural reforms,” Hong said.

Hong said he will also heed voices from private businesses.

The new presidential chief of staff for policy, Kim, graduated from Seoul National University and earned his masters degree in urban planning and engineering and his Ph.D. degree in environment from the school.

During the administration of President Roh Moo-hyun, Kim served as vice environment minister and presidential secretary for social affairs.