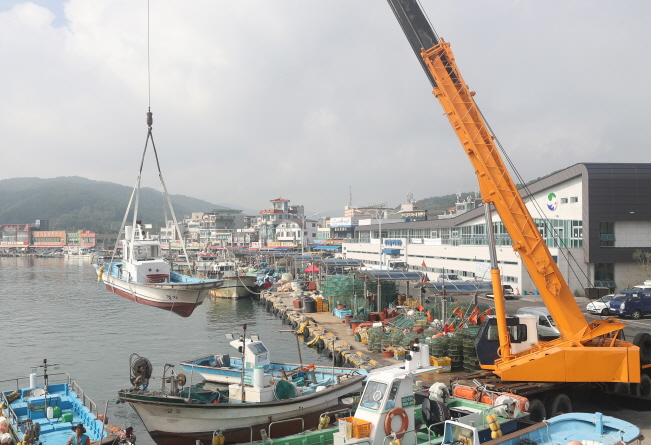 Fishers in the southeastern port city of Ulsan move a ship to ground on Sept. 5, 2019, as Typhoon Lingling is expected to hit the country later this week. (Yonhap)

SEOUL, Sept. 5 (Korea Bizwire) — South Korea was on alert on Thursday as a powerful typhoon is expected to hit the country with strong winds and heavy rain later this week.

Typhoon Lingling, this year’s 13th typhoon, is forecast to affect the Korean peninsula as early as Friday and directly hit the wider Seoul metropolitan area on Saturday, according to the weather agency.

The storm is then expected to reach northern Gyeonggi Province, outside of Seoul, or North Korea’s Hwanghae Province.

Ministry and provincial government officials reviewed measures aimed at limiting damage and ordered local governments to inspect safety plans, according to the Ministry of Interior and Safety.

“We advise people to refrain from going outdoors and inspect embankments and sewers in residential areas,” Interior Minister Chin Young said during the meeting.

The typhoon is picking up speed as it moves northwards. It was passing seas 320 kilometers southwest of Okinawa, Japan at a speed of 19 kilometers per hour at 3 p.m.

Its central pressure was 940 hectopascals, and the maximum wind speed near its center was 47 meters per second, or 169 kilometers per hour.

The weather agency warned of damage from strong winds in the southern and western regions of the country between Friday afternoon and Sunday morning.

Maximum wind speed is expected to hit 180 kilometers per hour, or 50 meters per second.

In some islands, stronger gusts are expected, with the maximum wind speed shooting up to 200 kilometers per hour, or 55 meters per second.

Winds of 28.5-32.6 m/s can uproot trees, while stronger gusts of 32.7 m/s or more can topple ships, according to the Beaufort wind force scale.

Local governments have started preparing safety measures ahead of the storm. Offices across the nation reviewed potentially dangerous areas and removed facilities that are prone to fall due to strong winds.

A number of municipal governments, including the Seoul Metropolitan Government, postponed outdoor events scheduled for the weekend.

Some outdoor camping facilities at national parks will also be suspended over the weekend.

Jeju marine officials have stepped up measures to notify fishers of potential risks and helped 14 fishing vessels to evacuate safely.