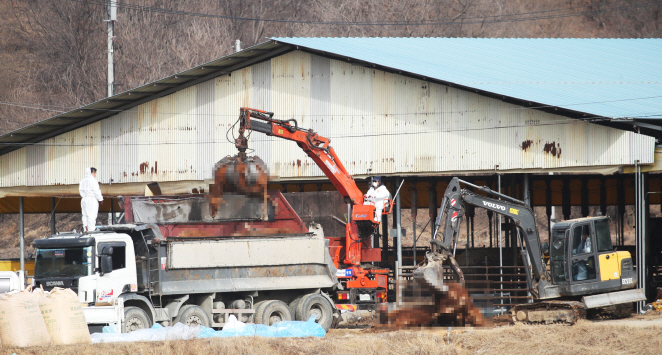 Culling is a recognized and proven strategy for the rapid elimination of livestock diseases such as foot-and-mouth disease and avian influenza. (Yonhap)

SEOUL, Mar. 26 (Korea Bizwire) — The government plans to support treatment for workers hired to cull livestock for disease eradication, who are known to suffer from post-traumatic stress disorder (PTSD) and other extreme psychological and mental illnesses.

The Ministry of Agriculture, Food and Rural Affairs and Ministry of Health and Welfare accepted the proposal submitted by the National Human Rights Commission of Korea (NHRCK) involving psychological treatment for the workers.

The agricultural ministry, jointly with the Ministry of Public Administration and Security and the Ministry of Health and Welfare, will draft a checklist for psychological and physical symptoms and a manual on trauma prevention for the workers who participated in the livestock culls.

In addition, the ministry will amend relevant legislation to allow workers to apply for the treatment program at any point in time, and pay for the cost of additional medical treatment.

Currently, relevant provisions set a six-month time limit from the day of participating in a cull to apply for the treatment program.

The agricultural ministry, through the National Center for Trauma, will study the traumatic disorders of the workers.

Culling is a recognized and proven strategy for the rapid elimination of livestock diseases such as foot-and-mouth disease and avian influenza.

Local authorities, military personnel, firefighters, and other public servants have typically been responsible for culling operations for disease control until recently, when workers from the private sector began to take over the work.

Now, most local authorities hire professional quarantine agencies to cull the animals, where in many cases many of the employees are migrant workers.

Many workers suffer from regret and fear after witnessing the death of so many animals.

In a study conducted by the NHRCK in 2017, 76 percent of 268 public servants and veterinarians who participated in the culls were found to be suffering from post-traumatic stress disorder, and 23.1 percent were suffering from severe depression.

“Many workers who participated in the foot-and-mouth disease crisis of 2010 and 2011 have committed suicide or died from overwork, making it a serious social issue,” said the NHRCK.

“But we still lack the interest and support to protect their psychological health.”