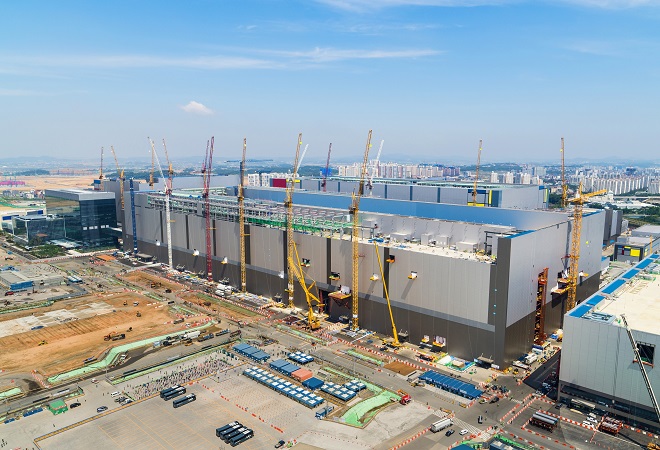 This photo provided by Samsung Electronics Co. shows the company’s P2 fab in Pyeongtaek, south of Seoul, where its NAND flash production line will be established.

The company said it plans to start mass-production of the new line at its second chip fab, named P2, in Pyeongtaek, some 70 kilometers south of Seoul, in the second half of 2021. It will produce Samsung’s latest V-NAND memory there.

Samsung did not reveal how much money will be spent on the new line, but industry insiders estimate around 8 trillion won (US$6.5 billion).

The investment is meant to cope with rising demand for NAND flash with the emergence of artificial intelligence, Internet of Things and 5G technologies, according to Samsung.

“The new investment reaffirms our commitment to sustain undisputed leadership in memory technologies, even in uncertain times,” said Choi Cheol, an executive vice president of memory global sales and marketing at Samsung.

As the recent virus pandemic has sparked increases of non-face-to-face activities, the company expects demand for such memory to grow rapidly.

Samsung has been the global leader in the NAND flash market since 2002.

In the first quarter of this year, the company held a 33.3 percent share of the market, according to industry researcher DRAMeXchange, far above Japan’s Kioxia Corp. that took a 19 percent share.

Samsung currently runs NAND flash production lines in Hwaseong and Pyeongtaek, both south of Seoul, as well as Xian, China.

Amid rising uncertainties due to the virus pandemic and renewed tensions between the United States and China, Samsung has been reinforcing its efforts to expand its chip business.

Last year, the South Korean tech titan unveiled a plan to become the world’s No. 1 logic chip maker by 2030 by investing 133 trillion won.

Samsung did not reveal how much money will be spent on the new line, but industry insiders estimate around 8 trillion won (US$6.5 billion).