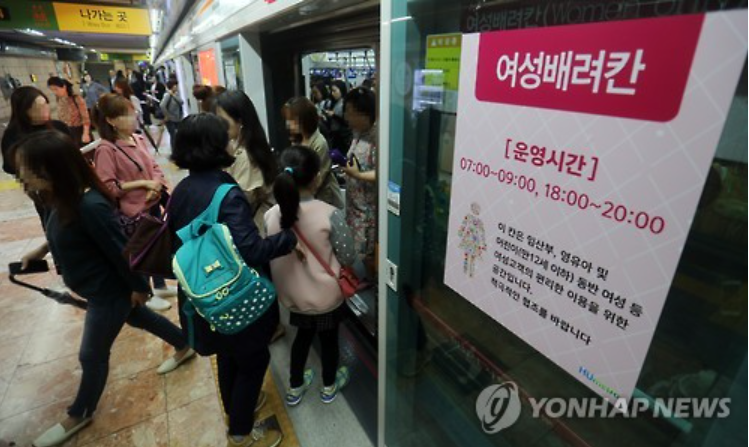 A poster in a subway station in Seoul shows operating hours of women only subway cars (image: Yonhap)

The government’s detailed plan includes a women’s safety app which will allow police to use surveillance cameras for monitoring and dispatch officers when users send SOS alerts to an integrated security center.

A report from the Supreme Court of Korea in 2009 showed Seoul has the highest rate of sex crimes per capita in the country with 34 sex offenders per 100,000 people.

As part of its efforts to eradicate sex crimes, the Seoul government is poised to tackle sexism head on by teaching children from a young age about gender equality, using textbooks in accordance with a global standard of gender equality set by prominent human rights groups like UNESCO.

Around seven thousand teachers and parents will be educated alongside students on gender equality so as to put an end to the vicious circle of misogyny passing down through generations.

The decision comes in the wake of recent studies showing a strong link between violence against women and gender inequality.

In collaboration with private organizations, legal advice and medical support will also be offered to victims of sex crimes.

Other measures to promote gender equality come in the form of free Kakaotalk emoticons. The Seoul government teamed up with the country’s most popular mobile messaging app to show images of boys participating in house chores or girls playing with sports car toys to fight gender stereotypes.

This isn’t the first time the Seoul Metropolitan Government has taken steps to improve women’s safety in the wake of the recent rise in crimes against women in Korea. Last year, Seoul was the first local government in the country to set up a dating violence hotline.

Seoul’s effort to champion women’s safety and gender equality will continue with plans to build a support organization for victims of online sex crimes next year.