“I send my condolences and words of encouragement to the bereaved families who stayed at the sit-in sites. I feel very sorry that you are still staying here because of this matter that was to be resolved a long time ago.”

“I hope this place can be more than a protest site. I hope it can be a place for everyone to remember and reflect. The citizens of Seoul and I will grieve with you. Until the nine bodies still in the sea return back to their families, we will hold on with you. Be strong.” 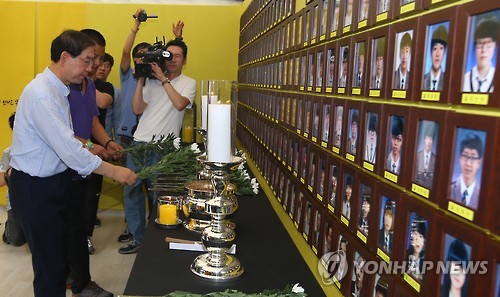 Since a year has passed from the time when the sit-in site of the Sewol ferry incident was first occupied, the bereaved families have re-imagined the site as an open space.

The seven sit-in sites along each side of the statue of Admiral Yi Sun-shin were tents made of synthetic textiles, but they are now wooden structures, and open to the public.

The spaces are set up as shrines, cafes, ribbon workshops and exhibits. Mayor Park paid his respects to those who perished in the accident and knelt on the ground to write an elegy.

With a brush he wrote ‘Across the sea of sadness to a road of peace and happiness’.

Mr. Lee Jong-chul, the father of a Danwon high school student who died in the tragedy, had stayed at the sit-in site for the past year.

He states, “Since this site was made by the public, we know we are not alone, but with the public. We will fight till the end, believing that the truth will be known.”