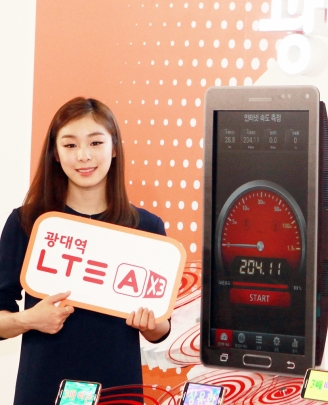 SK Telecom announced that it commercialized 225Mbps LTE-Advanced, that is three times as fast as 75Mbps LTE, on the smartphones supporting the technology for the first time in the world. (image credit: SK Telecom)

Seoul, Korea, Jun. 19 (Korea Bizwire) – SK Telecom (NYSE:SKM) announced, at a press conference held at its headquarter, that it commercialized 225Mbps LTE-Advanced, that is three times as fast as 75Mbps LTE, on the smartphones supporting the technology for the first time in the world.

SK Telecom upgraded the existing LTE-Advanced which provides up to 150Mbps by applying Carrier Aggregation (CA) technology that binds 20MHz bandwidth in 1.8GHz band and 10MHz bandwidth in 800MHz band.

225Mbps LTE-Advanced literally offers speeds of up to 225Mbps, which is three times as fast as 75Mbps LTE and fifteen times as 3G. At its peak speed, customers are able to download a 1GB movie just in 37 seconds.

Backed by the high-speed network service, subscribers of SK Telecom will be able to enjoy more enriched mobile experiences. Assuming that all 2GB, the average monthly data consumption per user for LTE, is spent on downloading, if using 225Mbps LTE-Advanced, the user can save 2 min+26 sec and 17 min + 18 sec of waiting time each month compared to the previous 75Mbps LTE and 3G respectively.

■ World’s first commercialization of the technology, again solidifying status as an ICT leader

* Figures from GSA, the Global mobile Suppliers’ Association, as of June 10, 2014

In particular, SK Telecom is being recognized as a frontier in the global telecommunications field with its success in commercialization of LTE in 2011 and LTE-Advanced in 2013 in a row. For two consecutive years in 2013 and 2014, the company was awarded “Outstanding LTE Contribution” at the GSMA Global Mobile Awards. Also, it won ‘Most Significant Development of a Commercial LTE Network – Operator’ at LTE World Summit last year and ‘Best Mobile Carrier’ at Telecom Asia Award this year for the third consecutive year.

SK Telecom said that 225Mbps LTE-Advanced secured the largest and densest service area across the nation.

The company plans to set itself apart from two other local mobile carriers by providing 225Mbps LTE-Advanced service all across the nation from July 1 and continue to maintain its comparative advantage in service coverage.

SK Telecom introduced Angles, a social multimedia service, along with 225Mbps LTE-Advanced. With Angles, high-definition video files filmed from different angles by up to four users can be automatically edited into one single file in the cloud then to be viewed and shared on smartphones. Last year, Angles was awarded top prize in the Service Idea Contest for LTE-Advanced, hosted by SK Telecom.

SK Telecom will unveil Cloud Game, a cloud-based streaming game platform, in June 24. Differently from the current games that have to be installed directly on a PC or a smartphone for activation, Cloud Game will run on a cloud server so that the user can enjoy it on his smartphone in a real-time streaming service format. SK Telecom explained that 225Mbps LTE-Advanced network enabled seamless streaming of ultra-high definition, ultra-high volume and multiplayer games.

The company also beefed up video contents as well. At the end of last May, SK Telecom and SK Broadband started the world’s first UHD service on ‘B tv mobile’. ‘B tv mobile’ has ‘Special Edition for UHD’ that provides UHD contents on VoD. UHD content is four times the resolution of full HD.

SK Telecom’s customers will not be charged extra for 225Mbps LTE-Advanced service. By providing the service at the current prices, SK Telecom expects to expand the market for diverse convergence services based on faster data communications.

Furthermore, SK Telecom will add optional data plans to enable its subscribers to use diverse contents at faster speeds without being burdened by heavier bill.

For example, at the end of June, SK Telecom will introduce ‘Subway Free’ plan, an optional data plan to allow unlimited data use in subways and subway stations in Seoul and the metropolitan area at 9,000 KRW a month- once exceeding 2GB on the same day, however, the connection will be kept under 400Kbps.

The company also plans to strengthen a lineup of 225Mbps LTE-Advanced smartphones to enable customers to enjoy high-volume, high-quality contents and services at faster speeds and with more pleasure.

SK Telecom secured a sufficient supply of Galaxy S5 for 225Mbps LTE-Advanced and starts to sell it from today in around 3,000 SK Telecom stores across the country and T World Direct(http://www.tworlddirect.com), its online sales shop.

Meanwhile, SK Telecom and Samsung Electronics jointly run a ‘Best & Best’ promotion to provide a quality smartphone case to the first 50,000 customers who purchase Galaxy S5 for 225Mbps LTE-Advanced and a 50% discount coupon for Samsung Gear Fit to all buyers of the phone.

Lee Jong-bong, Executive Vice President and Head of Network Division, and Kim Yuna, a new model for SK Telecom’s commercial, attended the press conference. Kim Yuna, a SK Telecom user herself, said that she also would like to see more new and interesting services come out using 225Mbps LTE-Advanced.

At the press conference, Lee demonstrated high speed of 225Mbps LTE-Advanced, commercialized first in Seoul, its metropolitan area and other metropolitan cities, by making a video call to Busan and Gwangju from the site.

Lee added “The world’s first commercialization of 225Mbps LTE-Advanced by SK Telecom will pave the way for Korea to open up an era of 5G in the future. With ceaseless innovation of services, SK Telecom surely will elevate Korea’s status as an ICT powerhouse.”