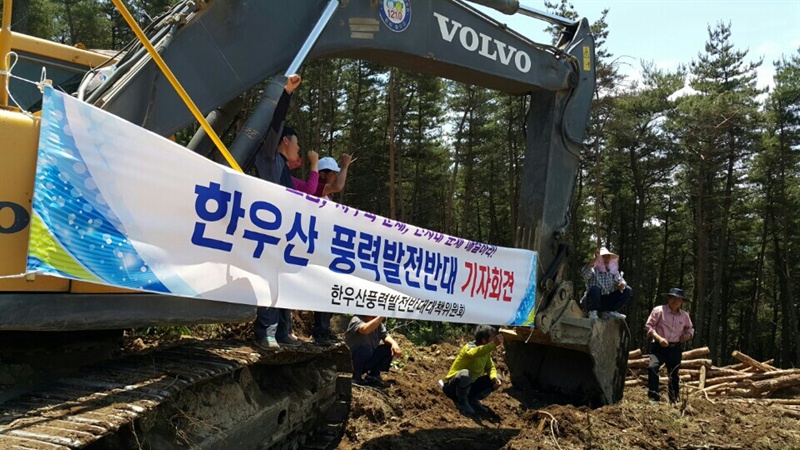 About 10 to 30 locals are occupying the site, delaying the construction. Most of them are aged, leading to concerns about their health under continuous exposure to the hot sun. (image: Civic Group)

UIRYEONG, Jun . 10 (Korea Bizwire) — A protest against the development of a wind power complex around Hanu Mountain and Maebong Mountain in Uiryeong County, Gyeongsangnam-do has been continuing for two weeks at the construction site.

About 10 to 30 locals are occupying the site, delaying the construction. Most of them are aged, leading to concerns about their health under continuous exposure to the hot sun.

However, some citizens oppose the construction for safety and health reasons. A committee of locals said that a landslide killed five people at a similar construction site for wind turbines during a typhoon in 2003.

The committee also expressed concerns that low frequency noise caused by the turning of wind turbine blades could threaten the health of citizens nearby.

The committee is demanding that the company set standards for low-frequency noise and conduct simulations of possible landslide accidents.

The committee also filed a court motion to cancel the construction.

However, the company said that it has already moved to meet the committee’s demands by having its business authorized by the Ministry of Trade, Industry and Energy and the Gyeongnam Urban Planning Committee.

The company said that locals are illegally occupying the construction site, and it has reported 13 individuals for obstruction of business.