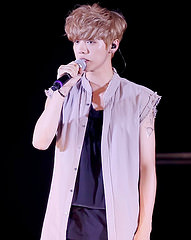 Luhan, 24, a member of EXO, was accused of appearing in various films, TV commercials and performances in his home country without prior permission. (image: Louis Kim/flickr)

SEOUL, Feb. 5 (Korea Bizwire) — S.M. Entertainment, one of South Korea’s leading talent agencies, said Thursday it has filed a damage suit with a Chinese court against a Chinese member of the popular K-pop boy band EXO for an alleged breach of contract.

Luhan, 24, a member of the band consisting of four Chinese and eight Korean members, was accused of appearing in various films, TV commercials and performances in his home country without prior permission, S.M. said.

The legal action came in response to lawsuits filed by Luhan and another Chinese member, Kris, with a Seoul court last year to demand their “unfair” contract signed with the company when they were trainees be annulled.

S.M. said it will soon file a similar lawsuit against Kris.

“The two indiscriminately have appeared in various films, ads and events borrowing EXO’s popularity, and such activities infringe upon rights of other members and S.M. and inflict economic losses to the group’s affiliate firms as well,” the agency said.

Debuting in 2012, EXO rose to fame in South Korea and China, after its first full-length album titled “XOXO (Kisses & Hugs)” and its repackaged version have sold more than 1 million copies in total in 2013, becoming the first group to go platinum in 12 years in the South Korean pop music industry.