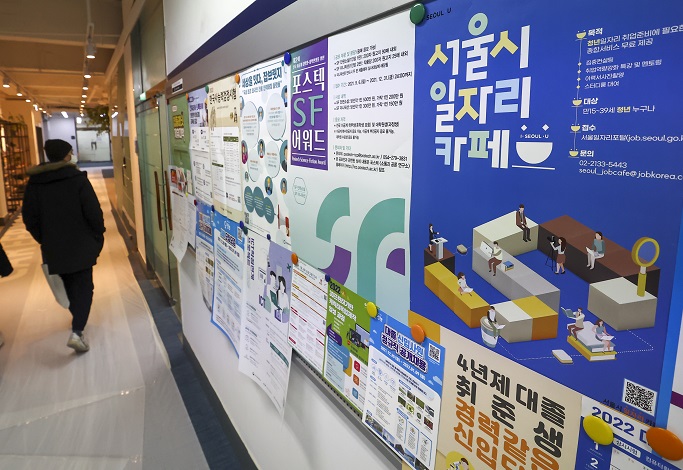 This file photo, taken Dec. 27, 2021, shows a job information bulletin board at a university in Seoul. (Yonhap)

According to a survey conducted by the National Youth Policy Institute of 2,041 men and women aged between 18-34, 63.9 percent of the respondents said that the continuous period of service for their first jobs after graduation was less than three years.

By employment type for those whose first job was wage employment, the share of permanent jobs stood at 66.6 percent, higher than temporary jobs at 33.4 percent.

Another 63.9 percent of the respondents had their first jobs at small and medium-sized enterprises with fewer than 30 employees. The share of those who started their careers at small businesses with one to four employees stood at 26.3 percent.

The share of those who started careers at large companies with more than 500 employees stood at 7.7 percent.

New graduates worked an average of 41 hours per week in their first jobs, with an average monthly income estimated at 2.13 million won (US$1,750).

Young adults with an academic attainment of less than high school graduation worked 44 hours per week on average, with their average monthly wage estimated at 2.03 million won.

Those with a university degree worked for 42 hours per week on average, with their average monthly wage estimated at 2.36 million won.