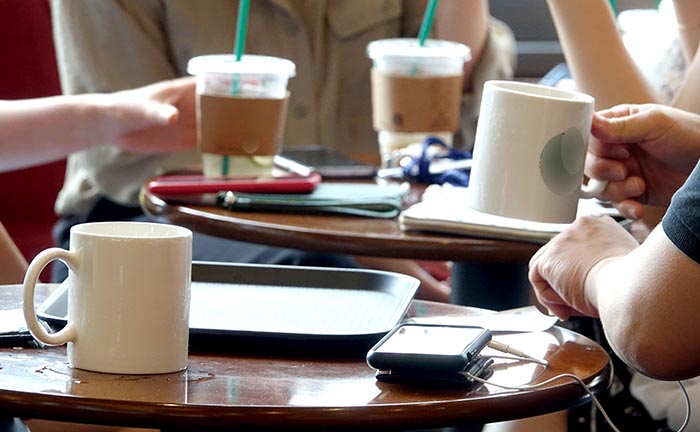 Drinks are still served in plastic cups in many cafes. (image: Yonhap)

SEOUL, Sept. 11 (Korea Bizwire) — At more than 80 percent, the vast majority of South Korean consumers are saying “yes” to the “no plastic cups in cafes” policy that started last month.

A majority are, however, dubious of the sanitation of mugs used instead. Also, it turns out that the type of cup determined the amount of coffee served.

From August 10 to 15, Consumers Korea, a civic watchdog for consumer rights, took an online poll of 790 consumers from their 20s to 60s on the new policy that bans cafes from serving drinks in plastic cups for customers who plan to consume the beverage on the premises.

Among the respondents, 83.4 percent said they agreed with the policy.  Only 8.4 percent responded they were against it, while the remaining 8.2 percent were unsure.

When asked if they had received their beverage in a plastic cup after indicating that they would be consuming it on-site, 39.4 percent said “yes”, implying that there is still confusion at the point of sale. Only 45.3 percent said “no”.

In addition, Consumers Korea tested six coffee franchises in the popular Gwanghwamun area – Starbucks, Angelinus, Ediya, Coffee Bean, A Twosome Place and Holly’s Coffee – on August 16 and 17 to verify the quantity of coffee, namely Americano and Iced Café-Latte, served in either type of containers. Only one of them served the same amount regardless of the cup, while the others had a discrepancy from 5 to 50㎖.

The ban on plastic cups in cafes started last August in response to a plastic waste crisis triggered when China stopped importing recyclable plastic back in January. The new policy directs cafes to use plastic cups for take-out orders only.