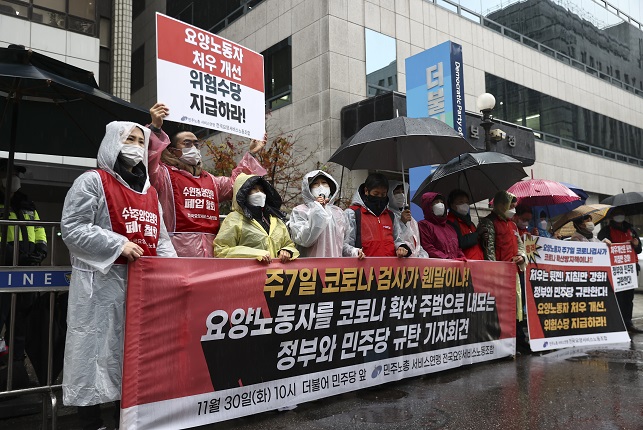 SEOUL, Dec. 10 (Korea Bizwire) — Caregivers have been excluded from proper support and protection despite an extreme workload during the pandemic era, a survey showed Thursday.

The Korean Confederation of Trade Unions conducted a nationwide survey of 273 caregivers in which 84 percent of all caregivers working at sanatoria and other facilities have suffered from a rising workload due to a reduction of staff over the last two years following the coronavirus outbreak.

Among respondents, 77 percent have been subject to heavier workloads in the pandemic era, while 61 percent have been exposed to a higher amount of stress due to a series of COVID-19 tests and restrictions on privacy.

Another 44 percent said they would like to quit their job because of extreme stress.

More than two thirds of of respondents said they had to take virus tests more than twice a week, 31.5 percent of whom have been taking them more than three times a week.

While virus tests are mandatory for caregivers, only 7 percent said they were properly paid for the time they spent getting the tests.

Among 189 respondents who had to be quarantined after engaging with a COVID-19 patient, 64 percent said they did not receive any payment during their forced leave of absence.