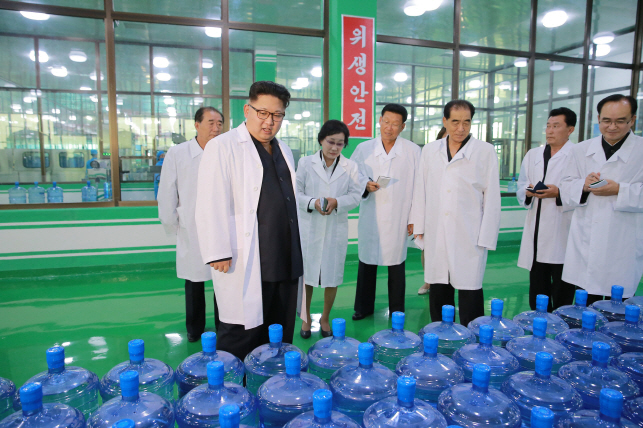 SEOUL, Jul. 9 (Korea Bizwire) — Experts on North Korea say that an increasing number of citizens of the secluded state are buying bottled water for their personal consumption.

One explanation for the increase in demand is attributed to the lack of clean water and proper water purification facilities.

But another reason for the newfound popularity of bottled water is the emergence of a new class of consumers who can afford to buy it.

According to a source familiar with the situation in North Korea, many inhabitants of North Korea’s larger cities buy bottled water.

“Previously, hosts would offer tap water to family guests, but nowadays, water from plastic bottles is being offered to visitors of well-off families,” said the source.

According to the source, carrying around bottled water has become a symbol of wealth in the nation.

A 500mL bottle of water is said to cost 1,500 won in North Korean currency. Considering that a kilogram of rice costs around 5,000 won, bottled water is relatively expensive.

The rise in the demand for bottled water in North Korea may be attributed to improving living standards in the reclusive state.

However, the main reason behind the rising demand may have more to do with the lack of water treatment facilities that make it possible for North Koreans to have better access to potable water.

Radio Free Asia cited a report filed by a member of the Swedish Red Cross that stated that one of the biggest problems North Korea was facing was acquiring clean water.

The report said that there was a lack of clean water in the nation, and approximately 6 million people were suffering because water facilities had not improved.

Much of North Korea’s mountains are bare as most of the trees have been cut down for firewood, leaving many areas susceptible to flooding. The practice has also made it difficult for people to have access to clean water.

Korean Central Television, the state-owned broadcaster in North Korea, as well as the nation’s state-run daily newspaper have echoed the North Korean regime’s efforts to provide fresh water to its people.

A large bottled water factory is currently being built in Pyongyang in addition to similar facilities in the provinces of Chagang and North Hamgyong.

North Korean media say that the large projects have been commissioned by the nation’s leader, Kim Jong-un.