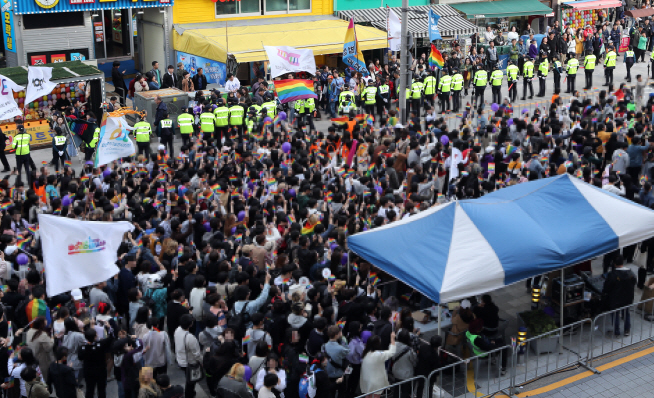 Children’s participation in political rallies and demonstrations is seen as problematic. (Yonhap)

SEOUL, Sept. 24 (Korea Bizwire) — Controversy is spreading via social media on whether children can participate willingly in political or religious events or not.

On the other side of the venue of the Incheon Queer Culture Festival in front of Bupyeong Station in Incheon in late August, rallies against sexual minorities were held simultaneously.

The rally organizers posted pictures of two children sitting on the floor praying, which later became controversial on SNS.

While there are proponents of children participating more in protests, the opposition asked, “How can we force children, who lack judgment, to participate in demonstrations?”

Another case of suspected mobilization of children for religious activities is missionary work.

One citizen was uncomfortable to see a child standing with street missionaries from a religious group that seemed to have come with his or her parents.

Meanwhile, children’s participation in political rallies and demonstrations is also seen as problematic.

Controversy erupted at an event in Gwanghwamun, central Seoul, on April 14 when a teenager, could not have been more than a primary or secondary school student, sang a song criticizing the opposition Liberty Korea Party.

Lee Bae-geun, head of the Korea Association for the Prevention of Child Abuse and Neglect, explained that the participation of children in the protest is an issue that conflicts between duty to protect children and their right to rally.

He further added that “children also have the freedom of assembly and demonstration, so children accompanying their parents to rallies cannot just be defined as child abuse.”

However, lawyer Park Sun-ah advised that the public should pay attention to mobilizing children en masse or forcing them to express their opinions verbally in order to increase the ripple effects of protests.