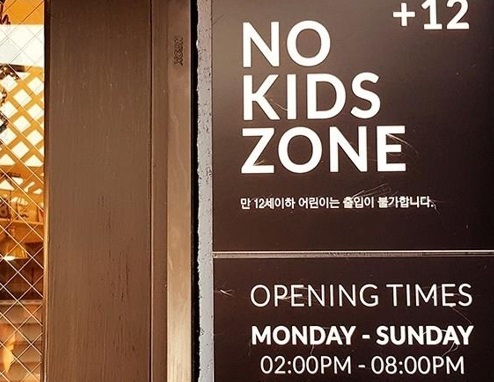 A famous cafe in Itaewon, Seoul, displays a sign banning children under 12. (Yonhap)

SEOUL, Nov. 30 (Korea Bizwire) — Searching meticulously for must-go, hip places to experience fine dining or relax over a cup of coffee is a ritual practiced by many people before going out.

Before rushing out brimming over with anticipation, however, there’s one more crucial step for those accompanied by children so as not to waste time: checking if they are allowed in with their little ones.

This is particularly true in Seoul’s trendy neighborhoods and in key tourist destinations like Jeju Island, as a growing number of such places — whether high-quality or low-end — are adopting policies barring children, causing heated arguments and acrimony between staff and indignant parents.

“I and my four-year-old girl did nothing wrong except to try setting foot on the premises after I missed the sign at the entrance that says, ‘No children under 10,’” grumbled Hong Jae-seon, 36, sharing her bad memories of being treated “like a nuisance” at a cafe on Jeju that boasts a stunning coastal view.

“Upon being denied, I automatically told the worker that my daughter is not rowdy. But I felt I was defending my girl for no reason. They just made us feel like people not abiding by set rules, which is just unfair,” she sighed.

Lee Jeong-min, a 40-year-old freelance translator, also complained that she felt “ridiculed when she and her two boys were rejected at a Jeju restaurant,” claiming that the shop did not even post a notice, apparently out of concern that such an explicit child ban may hurt its image.

“I fully understand why they enforce a no-child policy, as I’m no stranger to unruly kids in public places. But such a preemptive, universal boycott seems excessive,” she said. The mother then claimed that such anti-child policies would further dampen people’s willingness to have kids in the country already suffering from a falloff in newborns.

Though no official statistics are available, at least 400 business entities are believed to have officially adopted adult-only policies, according to some activists and web sites that trace relevant data. Given that a number of shop owners turn away customers with children without displaying notices, the real number may be greater.

In November last year, the National Human Rights Commission of Korea (NHRCK) judged that the establishment of no-kids zones constitutes a violation of the right to equality, calling for “the elimination of such a discriminatory business practice.”

It was in response to a petition filed by a father after being turned away by an Italian restaurant on Jeju when he visited with his three kids.

In regards to the decision, the NHRCK cited Clause 11 of the Constitution, which bans any discrimination based on gender, religion or social status. It moreover pointed to the U.N. Convention on the Rights of the Child which stipulates, “No child should be treated unfairly on any basis.” 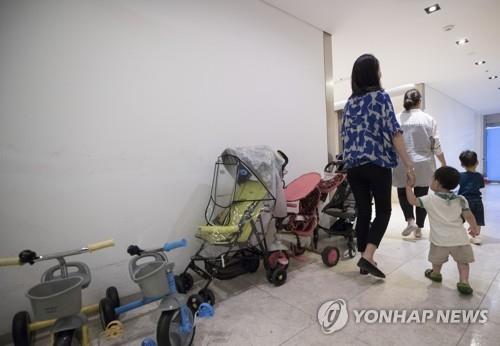 The restaurant owner, however, countered that he had “valid” reasons, saying the practice is unavoidable if he wants to run his business.

“Basically, it is for the sake of the children’s safety,” he told the rights watchdog, citing his past experience of a kid who was injured while playing near a stone wall around his building. The parents, he said, then demanded compensation. His identity was withheld by the NHRCK.

Citing several other unfortunate incidents, such as damage to property by young visitors and frequent unruly behavior that sparked complaints from other customers, the store owner said he decided to not welcome people with children starting in March last year, nearly four years after opening his business.

His stance is shared by many shop owners and service workers.

According to a survey conducted by Albamon, a recruitment website for part-timers, 84.3 percent of the 1,268 part-time hospitality workers questioned said they experienced inconvenience due to customers with young children, and 60 percent said they were in favor of the child ban.

“I do like kids and I have two nephews who are super cute, but I don’t want to be distracted by some misbehaving children or wailing babies,” said Jeong Yeon-soo, a 28-year-old piano instructor in Seoul.

“The other day, I saw a mom who just laid her baby down on a cafe chair and changed her diaper. She then took her cell phone out to play baby songs on YouTube that effectively ruined the serene atmosphere,” she said.

Some parents also welcome the move.

“Rather than paying too much attention to others out of concern that my kids would become their pet peeve, not going to places they deny admittance from the outset may be far better,” Kim Ah-ram said with a bitter smile.

“Along with the increase in no-kids zones, I have been able to find more ‘yes-kids’ shops these days that promote their child-friendly facilities, such as a nursing room and an indoor playground,” said Kim, a primary school teacher and mom of three girls. 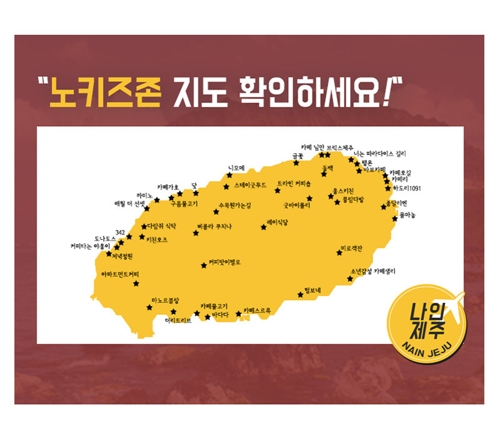 This map shows some cafes and restaurants on Jeju Island that ban children. It was made by Nain Jeju, a local cooperative entity that also provided this image. (Yonhap)

With the controversy over banning children showing no signs of dying down, experts have started to urge a shift in viewpoint when dealing with the issue.

“I doubt if it is proper to see this as a matter of political correctness or incorrectness,” said lawyer Yang Hong-seok.

“Usually, being politically correct involves challenges by the weak against the strong, but the rejection of young children cannot technically be seen as this kind of struggle,” Yang said, claiming that such framing could rather make things worse.

Another lawyer, who refused to be identified, said, “After all, the rights watchdog’s citation of the Constitution is not 100 percent correct in this case, as that rule regulates relations between the state and the people, not between individuals.”

Last year’s decision by the rights watchdog was the first official statement by a state institution in South Korea touching on the issue, but it is not legally binding and no administrative measures or court rulings on the matter actually exist.

“Administrative restrictions cannot be the solution here,” the lawyer said, noting that a private businessperson’s policy of banning children “is not meant to target the kids but parents who fail to control their offspring.”

Citing a growing intolerance of others as a key underlying reason for this conflict, professor Lee Taek-gwang at Seoul’s Kyunghee University voiced concerns about a possible spill-over effect.

“We should look at the fact that the debate has intensified, along with a growing disdain for moms who are sometimes called ‘momchung,’” he said, referring to a derogatory term for mothers who use their children as an excuse to disrespect others.

“If such words pop up to incite outrage, other similar types of restrictions could become justified and commonplace,” Lee said, citing a recent emergence of shops that ban senior citizens.

“We need to focus on raising public awareness, understanding and due moral and social obligations to find solutions,” he said, calling for policy support to minimize inconvenience on both sides of the argument.