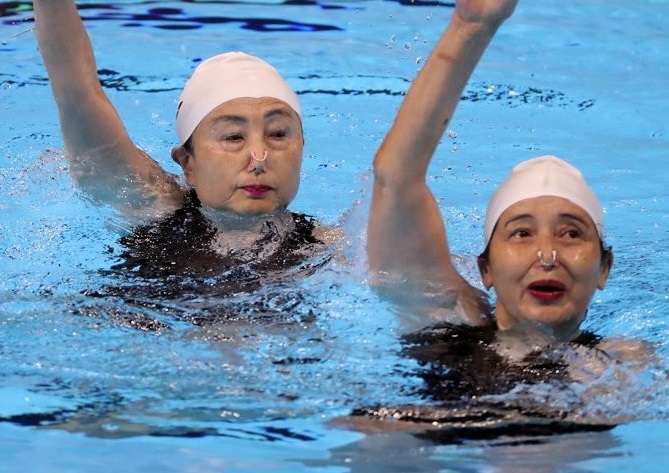 Japan’s Makiko Morota and Satomi Nakayama perform during the duet technical event of artistic swimming for people aged 60 through 69 during the FINA World Masters Championships at Yeomju Gymnasium in the southwestern city of Gwangju on Aug. 6, 2019. (Yonhap)

The competition will be held until August 18. The event is all the more meaningful and attractive with vast a number of elderly participants.

According to the event’s organizing committee, a flood of swimming enthusiasts from around the world, who still show off their youth despite their old age in such games as diving and water polo, will participate in the competition.

For elderly participants, age is nothing more than a number.

Among the participants in the competition, the oldest male athlete in the swimming category is Tancho Tenev, 91, a Bulgarian enthusiast, and the oldest female athlete is Toshiko Amano, 93 from Mexico.

Tenef was also named the oldest man in the men’s category in diving. The female diving champion is Joan Aldous of the U.K., who is 81 years old.

In particular, diving is a sport requiring considerable courage and coordination, but these older participants still enjoyed the thrill.

Artistic swimming, in which participants have to hold their breath underwater for long periods of time, had relatively young participants.

Françoise Noyer of France and Nancy Weiman of the United States are 71 years old, the oldest male and female competitors in artistic swimming, respectively.

That such a large number of elderly people are participating in the Masters swimming championships has to do with their culture, in which swimming is enjoyed as an integral part of their lives.

Their participation in the championship is also attributed to their penchant for travel abroad after retirement.

In addition, the Masters competition is a more of a festival where people enjoy the participation rather than a battle for victory. This is another factor that encourages older people to participate.