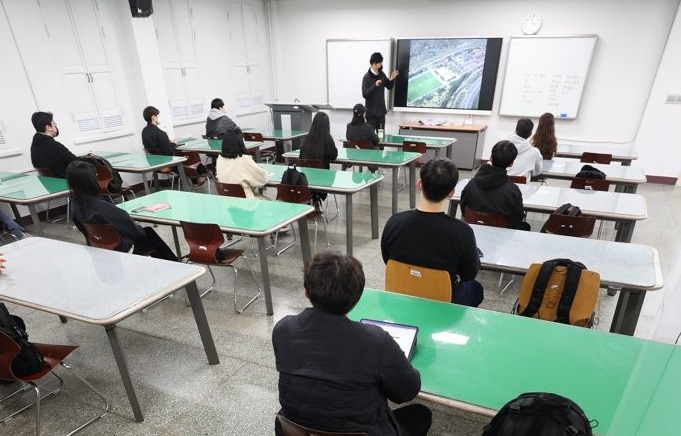 This file photo taken on March 8, 2021, shows an industrial design practice class under way at a university in Daegu, southeastern South Korea. (Yonhap)

The National Academy Engineering of Korea conducted a survey of 1,668 students and 254 professors at engineering universities across the country.

The students’ satisfaction with online lectures averaged 3.72 points on a scale of five this year, up from 3.09 points last year.

Their satisfaction with online experiment classes also rose to 3.38 points this year, up from 2.54 points last year.

Nonetheless, in response to the question asking about the type of classes they wanted to take after the pandemic becomes less serious, 59.3 percent of the students said that they want to take classes offline.

In response to a question asking about desirable testing methods, the share of those who selected face-to-face tests stood at 39.2 percent, higher than 15 percent for online tests, 17.9 percent for the submission of subject reports, and 18.3 percent for online and offline mixed tests.

Professors also showed an improvement in satisfaction with online lectures compared to a year ago, but the average score for their difficulty with a decline in students’ concentration levels rose to 3.99 this year from 3.61 last year.