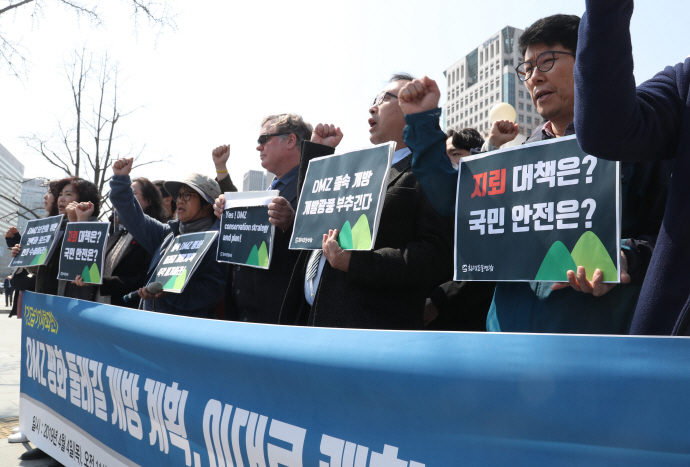 Activists from the Seoul-based Korean Federation for Environmental Movement chant a slogan during a rally in front of the Central Government Complex in Seoul on April 4, 2019, against the government plan to open to the public three hiking trails leading to the Demilitarized Zone (DMZ) separating the two Koreas starting late this month. (Yonhap)

SEOUL, Apr. 4 (Korea Bizwire) — Environmental activists on Thursday called for the government to scrap a plan to open to the public three hiking trails leading to the Demilitarized Zone (DMZ) separating the two Koreas starting late this month, arguing the plan could wreak havoc on the ecological system around the buffer zone.

The activists from the Seoul-based Korean Federation for Environmental Movement held a rally in front of the government complex to demand that the government come up with a set of strategies and a road map to preserve the area around the DMZ rather than implement the plan.

The 4-kilometer-wide, 250-km-long buffer zone was established in July 1953, when the two sides in the Korean War signed the armistice that ended hostilities.

On Wednesday, the government made the announcement of opening what is tentatively called the DMZ Peace Trails that involve three inter-Korean border towns — Goseong, Cheorwon and Paju on the inter-Korean border’s eastern, central and western sections, respectively.

During Thursday’s rally, the activists said the DMZ and nearby areas around the inter-Korean border retain a high level of ecological health as people’s access to them has been restricted.

More than 77 percent of the area within 15 kilometers south of the Military Demarcation Line between the two Koreas carry such a high ecological value that they are designated as sites for preservation.

“Entries into the areas, which have remained an almost no-man’s land since the three-year war, by vehicles and people could invariably have an ecological impact on them,” the activists said in a statement.

“The plan to operate the trails could lead to a prelude to an indiscreet development of the DMZ and nearby areas.”

For example, the location of the planned route of the Cheorwon trail that connects Baengmagoji and Arrowhead Ridge is a habitat for cranes to pass the winter, they said.

“The route should be preserved by any means for the sake of cranes,” the activists said.

For the DMZ project to proceed smoothly, cooperation from the UNC is necessary as the command oversees activities in the DMZ.

“Currently, what is left (for the implementation of the project) is a procedure for an official authorization by the UNC command,” Col. Roh Jae-cheon, a deputy ministry spokesman, told a regular press briefing.

“From the planning stage, we have had close consultations with the UNC and made onsite visits together in preparation (for the opening of the trails),” he added.