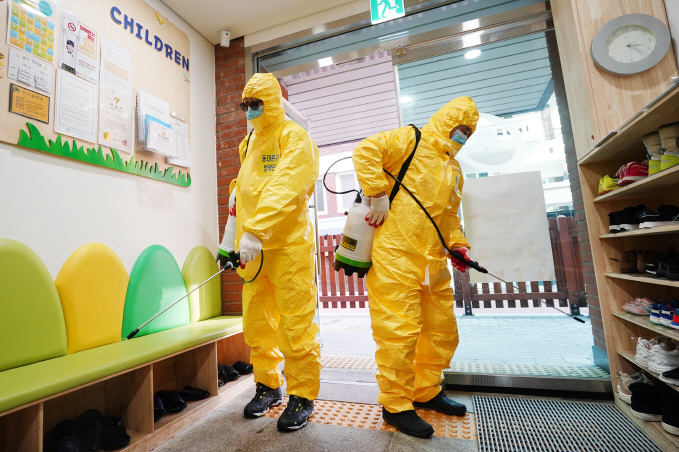 This image, provided by the Dongdaemun Ward office in Seoul, shows officials disinfecting a child care center in the area.

SEOUL, March 4 (Korea Bizwire) — Parents are struggling to find the time and space to spend time with their children as authorities have delayed the new school year due to the coronavirus outbreak, and with cabin fever setting in.

All kindergartens, elementary, middle, and high schools across the country will begin their school year three weeks later than originally planned.

Jeong, 39, a local office worker and the mother of two sons, complained that she had to spend an unexpected amount of money to buy board games and magnetic blocks for her children.

“We have a nanny at home, but I am worried that she might quit because of extended workload caused by the delay of the new school year,” she said.

Lee, 32, is currently working from home because of the coronavirus. He works and takes care of his 3-year-old son and his wife, who is pregnant.

“It is overwhelming,” he said. “There is a limit to playing indoors. My son is going wild, and he wouldn’t even take a nap.”

Childcare centers, managed by the Ministry of Health and Welfare, have not decided yet whether they will postpone the beginning of the new term.

Kim, 34, said her husband had to send their 5-year-old son to his grandparents after struggling to work and take care of their son at the same time.

“Our son always plays with his toys and crayons at home,” she said.

“He’s only allowed outside when going to the playground in our apartment complex with his mask on. And even then, it’s only for a short while.”

When asked about the possibility of childcare centers delaying operations, she said, “It would be much better to keep our son at home than get infected at the childcare center.”

“But all of us have to step in to take care of him,” she added. “It is a significant burden for us and our parents.”