“Ode to My Father” exceeded the milestone on Thursday, drawing a total of 6,097,483 people to 941 theaters around the country since it opened on Dec. 17, CJ Entertainment said.

The human drama drew a record 751,253 people on Thursday alone, the largest-ever number of viewers for a single film on New Year’s Day.

Industry experts say, if the current trend continues, the movie is expected to easily top 7 million this weekend. 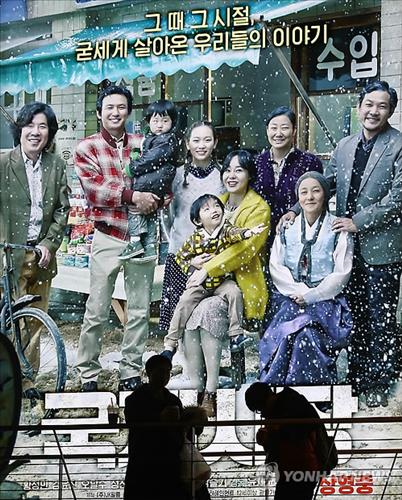 Directed by Youn Je-kyun, who is best known for the 2009 hit film “Haeundae,” “Ode to My Father” tells the story of an ordinary father named Deok-su (played by Hwang Jung-min) who sacrificed himself to support his family through the country’s turbulent modern history from the 1950-53 Korean War till recently.

But the movie has sparked heated online controversy since some young critics criticized it for taking an approach of justifying extreme nationalism in appealing to the people’s patriotism for money.

President Park Geun-hye fueled the debate by saying after watching the film earlier this week that “we should love the state whether we are pleasant or sad,” citing a scene from the movie in which the domestic fight between Deok-su and his wife is interrupted by the sound of the national anthem.