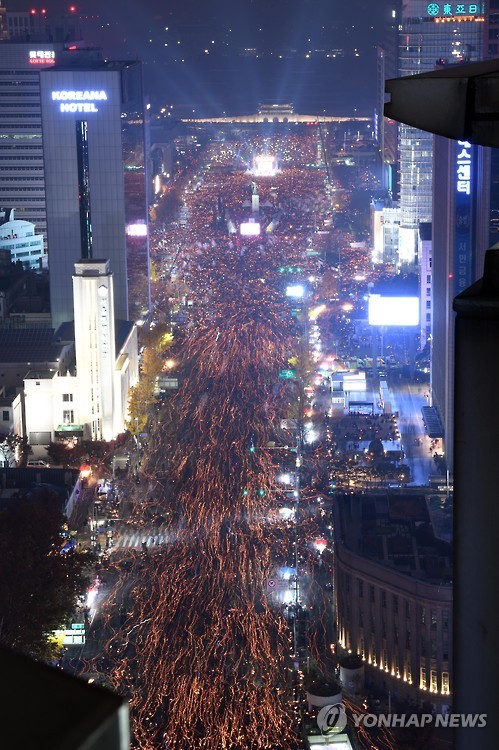 According to VOA, the interviewed defectors agree that the fact that a million people can gather for rallies demanding that the national leader “step down” could come as a shock to many North Koreans. (image: Yonhap)

But their propaganda may be having a reverse effect, said Voice of America on Thursday, citing interviews with former North Korean residents who claimed that the North’s media coverage is indirectly promoting democracy, the freedom of speech and expression that go against the country’s political agenda.

“Covering the ongoing protests against President Park could help citizens realize the true side of South Korean society, where citizens can practice rights guaranteed by democracy,” said Kim Ma-tae, a North Korean defector who managed to escape the tyranny in 2014, in an interview with VOA.

“They’re very jealous when they realize that, thinking ‘I wish I could live in a place like that’”.

According to VOA, the interviewed defectors agree that the fact that a million people can gather for rallies demanding that the national leader “step down” could come as a shock to many North Koreans.

One of the defectors even said that it was when she heard about the student protests in the South during the 1980s and 90s that she realized North Korea’s education system was biased.

“South Koreans could protest whenever they wanted, and see everything they wanted,” recalled Ma Young-ae. “The government had said that South Korea was full of beggars and extremely poor. But when I saw the rallies, I was impressed at the landscapes of Seoul.”

South Korean officials suggest that recent propaganda by North Korean state media, covering the protests and denouncing the president, is an effort to take advantage of the crisis to promote its superiority over its southern foe.

North Korea has made several remarks since the controversy exploded last month, with state-owned Korean Central Television calling President Park a “wicked woman” and her government a “party of traitors” that faces the outrage of the people.