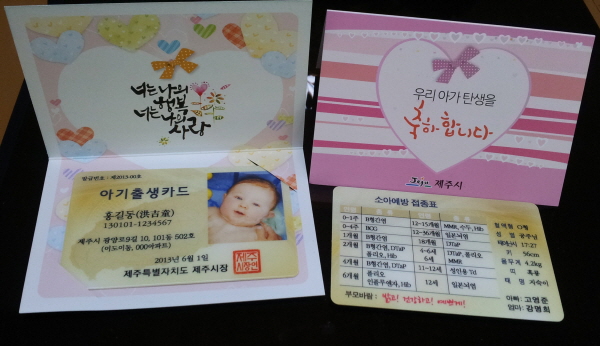 The birth card is made in similar design and size as the official identification card. (image: Jeju Special Self-governing Province)

SEOUL, May 27 (Korea Bizwire) – It turned out that Jeju Special Self-governing Province’s unique policy of “birth card” service for newborn babies has been working quite well.

On May 23, according to the Jeju Provincial government, the number of applications for birth cards, issued by the city administrators and district offices, has exceeded 3,000 by the end of April.

The policy which was implemented in a bid to make the citizens of Jeju happier has met with a favorable reception by the public, especially by young parents. Since the measure was first introduced in May 2013, over the first seven months until November 2013, 1,559 people have applied for the birth card. For the next five months since December 2013 when the age requirement was expanded to 2 year olds, more than 1,500 people have applied for the birth card.

Any baby born in Jeju is eligible for the birth card; the baby’s immediate family member can apply for the card upon registering the birth at district offices. Issuance of a baby birth card takes about 15 days.

A Jeju Provincial government official said, “By issuing birth cards with a congratulatory message for the newborn, we can celebrate the birth of the babies and provide the parents with useful references, which come in handy upon parenting.”