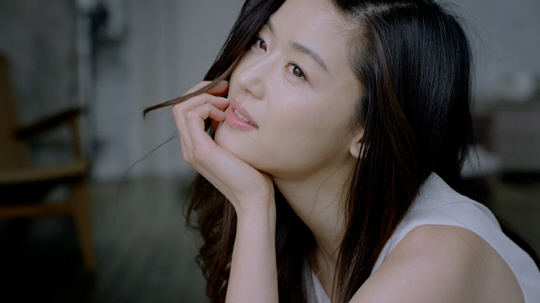 The biggest charm in her, as many has said, is her natural beauty.(image:Hanyul)

SEOUL, June 4 (Korea Bizwire) - The famous heroine of the smash-hit Korean TV series “My Love from the Star,” Jun Ji-hyun, also known as Gianna Jun, has become famous for her luminous and vibrant skin — envied around the world, and how she is able to maintain such shining skin even with her tight schedule has been a mystery for many.

The biggest charm in her, as many has said, is her natural beauty. The 34-year-old celebrity looks just as young as K-pop “idol” stars — girl band members — and has skin that is just as clean as theirs. Indeed, flamboyant makeup and styling play a major role, but moist and clear skin itself is the most important factor in woman’s beauty.

Then what are the secrets of keeping her skin buoyant and young in a way that playing a lover of the seven-year-younger counterpart, Kim Soo-hyun, wouldn’t be so awkward at all? Jeon reveals her secrets to be home caring, using sunscreens, meticulous cleansing in a short period of time and drinking of sufficient water all the time.

The first know-how she let out was meticulous facial cleansing. If you want to keep clean skin without any problems, you should care more about facial cleansing which will clean out the waste matter deposited underneath your skin. The heroine said scrupulous facial wash is all-important for her and said that she starts with lukewarm water and finishes with cold water when washing her face.

She mentioned the key to her cleansing is not to rub the cleanser for too long, and finish the cleansing as quickly as possible. She also added that one should tap on her face gently with fingertips as if you are massaging it, after the cleansing.

She also emphasized sufficient water intake and a good night’s sleep for clean skin. Jun said that she drinks water — little bit cold or at room temperature — frequently throughout the day to keep her sensitive and dry skin moisturized. To have a sound sleep at night, the beauty queen recommended lower-body bathing, light stretching or meditation right before going to bed to induce sleep. Jogging and yoga are also the things that she does every day to keep healthy and fit body.

A skin care expert said, “The current beauty trend puts premium on “natural beauty,” which comes above all from clear skin. It is important to avoid habits that will harm your skin and try to cultivate fundamental healthy habits which often are overlooked in daily lives.”

Korea’s most favorite actress is also famous for her sylphlike body. Jun appeared in “Celebrity Scoops” in JTBC on May 30 and told the interviewer that she enjoys having fried chicken and beer and when asked how she maintains her slim body nonetheless, she simply said, “I exercise.”

In fact, Jun Ji-hyun is famous as a workout freak. Many of her confidants said indeed the ingrained diligence and rigorous self-management is what made her the way she is. Some of her colleagues in a blockbuster movie “The Thieves” have testified to such a statement. 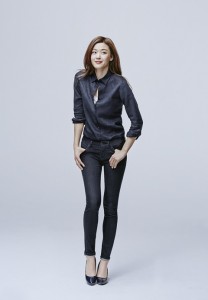 Korea’s most favorite actress is also famous for her sylphlike body. (image:Uniqlo)

Kim Hae-sook, another actress who appeared with Jun in the film, said that she was also left open mouthed to Jun’s enthusiasm and fitness, when she saw Jun coming out of the swimming pool without a single gasp or a frown on her face after swimming four laps.

The beauty is in fact far from a sleepyhead as she is well known to be a “morning workout mania.” Jun, who described herself as a morning person, said that she is accustomed to waking up at six in the morning and going straight to workout, which proves again that the impetus that has put herself where she is now is pure diligence and self-managing ability.