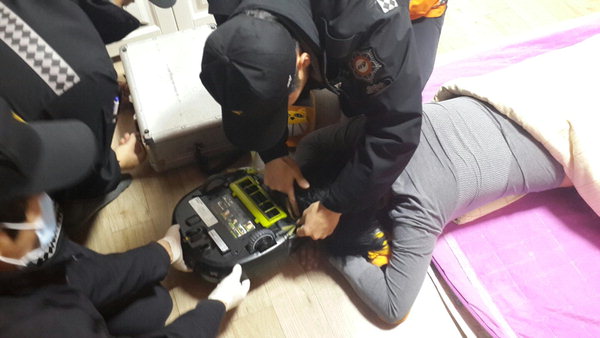 The robot vacuum came around her relaxing on the floor, and suddenly sucked her hair into its nozzle. (image:Changwon Fire Service Headquarters)

SEOUL, Feb. 5 (Korea Bizwire) – A powerful robot vacuum cleaner caused an unlikely accident involving a Korean housewife, and required the intervention of a couple of paramedics. On January 3, a woman in her fifties had her hair sucked up into a robot vacuum at her home in the city of Changwon, South Korea.

On the day of the accident, she turned on her robot vacuum as usual, and laid down flat on the floor to rest, leaving the robot to do its job. The robot vacuum came around her relaxing on the floor, and suddenly sucked her hair into its nozzle. The vacuum stopped running one to two minutes after the sudden hair intake.

The startled housewife called 119, Korea’s emergency telephone number. Fortunately, paramedics quickly arrived at the scene, and successfully disjoined her hair from the nozzle. The housewife suffered only minor injuries.

The problematic robot vacuum had a nozzle with a roller inside, which sweeps and vacuums floors. The Changwon Fire Service Headquarters presumed that the vacuum’s sensors identified the woman’s hair as dust.

The likelihood of this type accident occurring is undoubtedly more significant in countries with a “sitting-on-the-floor” culture. Since Koreans love to rest or relax on a toasty, cleanly swept floor, exercising caution on using a robot vacuum is probably a good idea.