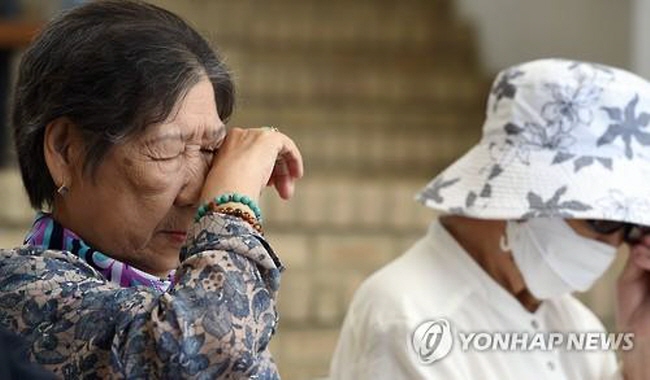 Kang Il-chul (L), a former sex slave who worked at Japan’s military brothels during World War II, wipes tears from her eyes during a press conference at the House of Sharing in Gwangju, Gyeonggi Province, on June 23, 2015. (image: Yonhap)

GWANGJU, South Korea, Jun. 23 (Korea Bizwire) — A dozen Korean victims of Japan’s wartime sex slavery said Tuesday they will take Japan to court in the U.S. unless Tokyo apologizes by the end of this month for the atrocities done to them.

The 12, including Yoo Hee-nam and Kang Il-chul, plan to lodge a civil suit at a California district court on July 1 unless Japan demonstrates sincere intent to make amends for its crimes during World War II before then, Ahn Shin-kwon, director of the House of Sharing, told reporters at a news conference, quoting the victims.

They would seek US$2 million each for the wartime atrocities committed by Japan and its companies “and their continued denial of instigating them,” Ahn said.

The shelter decided to take the case to the U.S. because previous attempts to solve it in South Korea or Japan have failed.

The defendants include the family members of then Japanese Emperor Hirohito, Japanese Prime Minister Shinzo Abe, Japanese firms that enslaved Koreans for forced labor during the war and Sankei Shimbun, which has called former sex slaves “prostitutes” in its articles, Ahn said.’

Historians estimate that more than 200,000 women, mostly Koreans, were either kidnapped or deceived by the Japanese into working at their frontline military brothels during the war.

Two of the plaintiffs — Kim Soon-deok and Choi Seon-sun — have passed away since the home started filing the document, so they will be represented by their sons, Yang Han-seok and Wang Sang-mun, respectively, Ahn said.

The former “comfort women” said they decided to take matters into their own hands because the South Korean government has made little progress toward a diplomatic solution.

“Before, we were a colony of Japan, and now we have our own country,” Lee Ok-seon, an 88-year-old former sex slave, said. “But still, we old women are forced to solve the issue by ourselves.”

All of the plaintiffs are above the age of 80.

The move comes as South Korea and Japan mark the 50th anniversary of their normalization of ties this year.

On June 22, 1965, Japan and South Korea agreed to nullify a treaty that annexed Korea to Japan. Korea was a Japanese colony from 1910-45.

Kim Hyung-jin, an attorney representing the “comfort women,” stressed that the plaintiffs weren’t after the money.

“Money is absolutely not the point,” he said. “The point is that Japan admits to its war crimes and offers a sincere apology.”

The House of Sharing has tried to bring Japan to a South Korean court since 2013 but to no avail.

Representatives from the Japanese government failed to show up at the first conciliation hearing between Japan and the former sex slaves in Seoul last Friday.

Japan claims it made sufficient reparations when it paid South Korea a lump sum of US$500 million in 1965.

A similar class-action suit was filed in 2000 with a federal court in Washington D.C. but the court sided with Japan, saying the case was beyond its jurisdiction.

Kim, however, said he was confident the odds are in their favor this time.

“Many precedents on war crimes have been set since 2000, including the landmark judgments made on the Rwanda genocide,” he said. “It also doesn’t help the defendants that they continue to defame former sex slaves by denying the role they played in their plight.”

The South Korean government has 238 sex slaves on file and of those, only 50 are still alive.