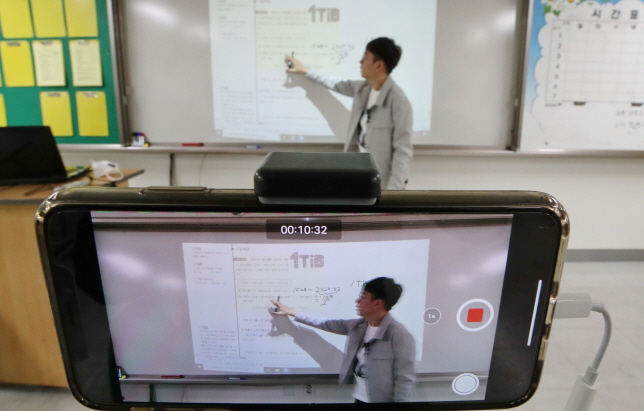 A teacher gives a demonstration of a remote class at a middle school in Seoul on March 30, 2020. (Yonhap)

The question is drawing rising public attention as elementary and secondary schools nationwide were asked by the government on Tuesday to begin the spring semester with online classes, in steps starting April 9, to prevent classroom infections of the COVID-19 virus.

Online classes usually refer to a form of education in which students receive instructions and ask questions over the internet, while their teachers broadcast lessons from classrooms.

South Korea is known as a global powerhouse in information and telecommunication technology. But full-fledged online classes are unprecedented at the nation’s elementary, middle and high schools.

Due to the lack of experience in distance learning and relevant IT infrastructure at schools and homes, many education experts and parents forecast trial and error, as well as confusion, will inevitably occur in the field for the time being.

They also note a wide digital divide existing between rural and urban schools and between rich and poor households may also pose a hurdle.

According to a research paper published by the Korean Educational Development Institute in 2018, only 0.3 percent of middle and high school students had first-hand experience of distance learning classes.

The paper also said only 18.9 percent of middle schools and 29.5 percent of high schools had experience remotely operating classes as of 2018.

Worse yet, about 60 percent of all schools owned computers aged one to five years, while computers owned by another 30 percent were older than five years, it said.

The lack of IT infrastructure will likely pose a problem, as the Ministry of Education recommends real-time two-way online classes for all schools.

But many teachers are skeptical about the feasibility of interactive online classes, citing the scarcity of Wi-Fi networks and webcams in classrooms, in particular.

They argue an efficient two-way online class will be impossible without the assistance of wireless networks in classrooms and webcams on teachers’ notebooks.

“Video class programs recommended by the authorities work better with smartphones or tablet devices than with laptops using wired networks,” said a teacher at a high school in Suwon, south of Seoul.

“Wi-Fi is needed to efficiently prepare for two-way remote classes in a short period of time. But the wireless networks are absent in almost all ordinary classrooms,” he said.

According to the ministry’s data, as many as 3,600 elementary and middle schools nationwide have yet to install Wi-Fi networks in classrooms. 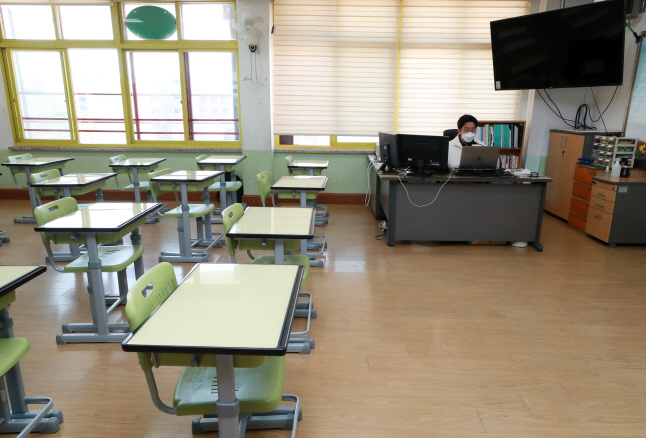 A teacher tests an online education system at an elementary school in southern Seoul on March 30, 2020. (Yonhap)

Experts and teachers also say it is unknown whether servers will be acceptable when dozens of students are connected at the same time.

In addition, the success of two-way online classes will depend on the quality of digital devices at home, they note.

“Two-way classes basically require a laptop in each home or a desktop with a webcam. Smartphones are also possible, but in the case of lower-grade students, many do not have a smartphone,” another teacher in Suwon said.

The digital divide is another problem, as many low-income households and multi-child families don’t have sufficient computers or smartphones needed for online classes.

A government report shows three in 10 households in South Korea don’t have a computer, such as a desktop, notebook or tablet PC.

A separate report found that 92 to 93.5 percent of middle and high school students have a smartphone, but the smartphone penetration rate reaches 74.2 percent and 37.2 percent, respectively, for upper-grade and lower-grade elementary school students.

In this regard, officials at the education ministry said they are now surveying the number of students without appropriate online education devices.

“Schools and local educational offices now have about 120,000 sets of online education devices in storage. An initial survey has found a supply shortage of about 3,000 sets,” a ministry official said.

An elementary school teacher in the central province of South Chungcheong also expressed concern about a digital divide among students in rural and urban areas.

“Rural schools are generally lacking in both experienced teachers and digital devices. Many rural students may not be able to take online classes due to their home environment,” the teacher said, calling for detailed countermeasures.