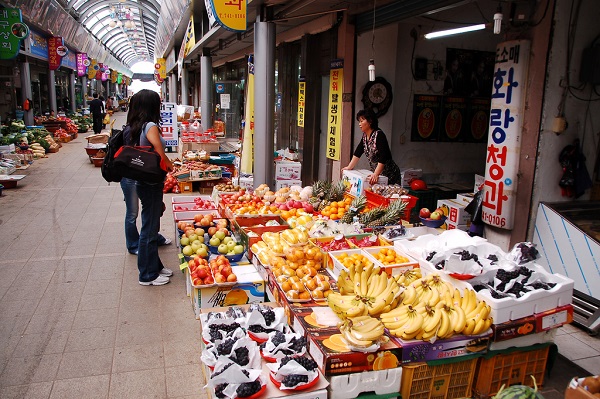 the total sales of goods from traditional markets across the country halved only in 12 years. (image: Wikipedia)

SEOUL, Oct. 9 (Korea Bizwire) — Traditional markets are forced into a corner across the world as new giants have increasingly dominated the grocery industry.

The Huffington Post reported on October 6 that some grocery giants such as Walmart, Costco and Whole Foods are slowly killing traditional supermarkets including Kroger, Safeway and Publix. According to the news outlet, various factors are changing the way Americans shop. Customers in the U.S. are highly likely to look for more inexpensive goods as the economy remains fragile.

The Korean government has put forth its effort to revitalize the conventional markets across the country since 2002, spending 3.5 trillion won for 1,084 markets to modernize facilities such as parking lots, arcades and moving paths.

Not only that, the government launched gift certificates for the markets in 2009. It has issued a total of about 1.7 trillion won of the certificates, only part of which worth approximately 1.4 trillion won was sold. Besides, it has forced big supermarkets operated by large corporations to close on second and fourth Sundays every month as a way to help small merchant prosper.

Despite these efforts, however, traditional markets are still in troubled times. The modernized facilities are lagging behind sophisticated and neat big markets. The gift cards for them are not that favored by customers as well.

Even though large corporations buy the vouchers in quantity and give away to their employees as holiday presents to help the government’s cause, they are not so welcomed. Some people even try to monetize them on the Internet. Furthermore, the Korean government doesn’t seem to make further efforts to boost the certificates except for seriously depending on conglomerates for their sales.