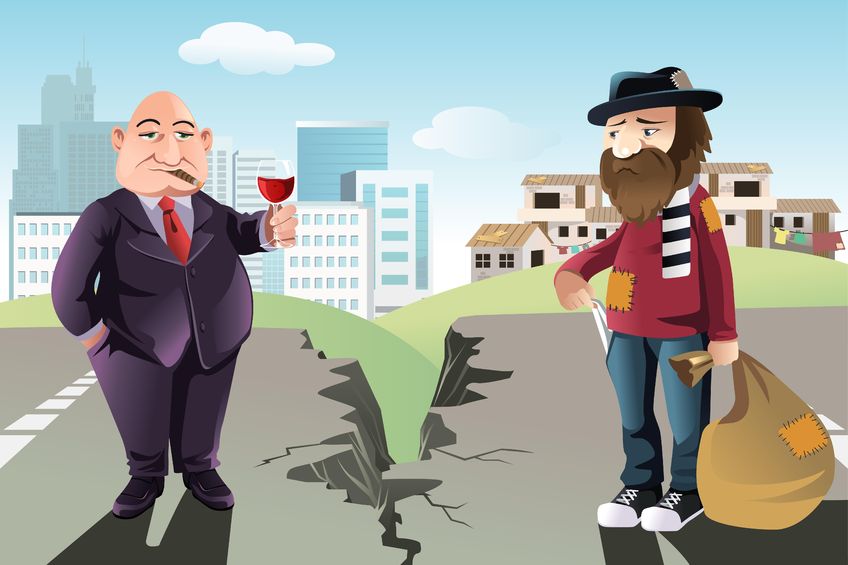 Execs are less inclined than the general population to see inequality as a major problem but more likely to feel increasing taxes on the very rich is the right thing to do (image: Kobizmedia/ Korea Bizwire)

NEW YORK, July 8, 2014 (Korea Bizwire)–A recent Harris Poll found a strong majority of Americans believing economic inequality in the U.S. today is a problem (79%), with over half believing more specifically that it’s a major problem (54%). New findings further reveal that U.S. executives are even more likely than the general population to see it as a problem overall (88%), albeit less inclined to see it as a major problem (44%).

These are some of the results of a Harris Poll of 301 corporate executives at companies with revenues of $1 billion or more; all interviews were conducted online in the United States between May 16 and 30, 2014 using the Harris Poll Executive Omnibus research platform. (Full results, including data tables, available here)

Looking at the underlying nature of economic inequality in the United States, majorities of executives agree both that it’s a political issue (81%, up from 72% among the general population) and that it’s a moral one (57%, on par with 59% among Americans overall).

Nearly three-fourths of executives (73%, up from 66% among U.S. adults overall) believe it’s important that the government introduce policies to reduce inequality in the U.S., with four in ten (41%, comparable to 40% among the general population) identifying it as very important.

The root of the matter When asked how much a series of factors are causes of inequality in the United States today, strong majorities of executives see each as contributing either a great deal or somewhat. Over eight in ten executives see the loss of manufacturing jobs to China, India and other low cost countries (87%, up a bit from 83% among Americans as a whole); the failure of the public school systems to educate many people (85% execs vs. 75% general population); the tax system (84% execs vs. 81% gen. pop.); the influence of big business on government policies (81% execs vs. 80% gen. pop.); the influence of very rich people on government policy (81% execs vs. 78% gen. pop.) and the globalization of the world economy (81% execs, up considerably vs. 67% gen. pop.) as causes of inequality.

Roughly seven in ten point to restrictions on businesses which prevent them from creating more jobs (73% execs vs. 66% gen. pop.) and the current minimum wage (69% execs vs. 65% gen. pop.) as causes.

While executives do agree (along with the rest of Americans) that the influence of the very rich is a cause of economic inequality, a majority of execs also feel that this group is more broadly – and unfairly – getting a bad rap, with 56% agreeing that the rich have become scapegoats for everything that’s wrong in the U.S.

Taxing issues While executives are in alignment with the general population in pointing to our tax system as a cause of economic inequality in the United States (84% execs vs. 81% gen. pop.), that doesn’t mean the groups are in synch with one another when it comes to what should change. When asked whether taxes on different groups of Americans – segmented by income – are too high, too low or fair, executives are less likely than the general population to indicate feeling that taxes on the poor are too high (38% execs vs. 46% gen. pop.) but more likely to say taxes on people with incomes of $200,000 per year are too high (39% execs vs. 17% gen. pop.).

Sentiments are less divided when looking at more outsized income groups, with majorities of execs and the general population alike seeing taxes as being too low currently for people with incomes of $1,000,000 per year (56% execs vs. 58% gen. pop.) and billionaires (63% execs vs. 65% gen. pop.). The majorities of both groups are also in agreement that taxes are too high for the middle class (61% execs vs. 62% gen. pop.).

Voting issues Not long ago a few very rich individuals made some very public and controversial remarks suggesting that voting rights, or the degree to which votes “count,” should be tied in some way to taxes. While majorities of both executives and the general population disagree with various forms of this concept, it’s worth noting that the minority support such concepts do receive is stronger among the executives segment than among their general population counterparts.

Most prominently, nearly half of executives (46%) and nearly four in ten U.S. adults overall (37%) agree that the right to vote should be reserved for those who pay taxes. Although the degree to which a person’s vote counts in elections being tied to taxes in some way is a concept receiving only minority support among both executives and Americans overall, it’s noteworthy that far stronger minorities of executives agree that the amount one pays in taxes (28% execs vs. 14% gen. pop.) or the rate at which one is taxed (27% execs vs. 14% gen. pop.) should impact the relative power of one’s vote.

Methodology This Harris Poll was conducted online within the United States between May 16 and 30, 2014 among 301 corporate executives at companies with revenues of $1 billion or more and utilized the Harris Poll Executive Omnibus research platform. Figures for age, sex, race/ethnicity, education, region and household income were weighted where necessary to bring them into line with their actual proportions in the population. Propensity score weighting was also used to adjust for respondents’ propensity to be online.

All sample surveys and polls, whether or not they use probability sampling, are subject to multiple sources of error which are most often not possible to quantify or estimate, including sampling error, coverage error, error associated with nonresponse, error associated with question wording and response options, and post-survey weighting and adjustments. Therefore, The Harris Poll avoids the words “margin of error” as they are misleading. All that can be calculated are different possible sampling errors with different probabilities for pure, unweighted, random samples with 100% response rates. These are only theoretical because no published polls come close to this ideal.

These statements conform to the principles of disclosure of the National Council on Public Polls.

The results of this Harris Poll may not be used in advertising, marketing or promotion without the prior written permission of The Harris Poll.

Product and brand names are trademarks or registered trademarks of their respective owners.

About Nielsen & The Harris Poll On February 3, 2014, Nielsen acquired Harris Interactive and The Harris Poll. Nielsen Holdings N.V. (NYSE:   NLSN) is a global information and measurement company with leading market positions in marketing and consumer information, television and other media measurement, online intelligence and mobile measurement. Nielsen has a presence in approximately 100 countries, with headquarters in New York, USA and Diemen, the Netherlands. For more information, visit www.nielsen.com