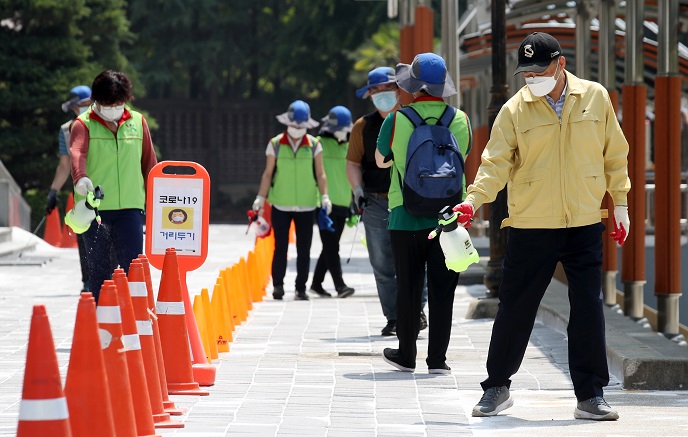 Health workers disinfect a school in Gwangju on June 22, 2020. (Yonhap)

SEOUL, June 23 (Korea Bizwire) – Nine in 10 South Koreans fear they could be discriminated against following the coronavirus outbreak, a poll said Tuesday, indicating the pandemic may have heightened public sensitivity to discrimination.

In the poll of 1,000 adults nationwide by the National Human Rights Commission, 91.1 percent said they agree to the view that they could be a target of social discrimination or become a minority group in the aftermath of COVID-19.

Nearly 7 in 10 respondents, or 69.3 percent, said they are aware of social groups that have become a target of hate or discrimination as a result of the spread of the coronavirus.

Eight out of 10 respondents, or 82 percent, said discrimination in South Korea is serious. Of them, 62.1 percent said it is somewhat serious, while the other 19.9 percent described it as very serious.

Seventeen percent said discrimination is not very serious, while only 1 percent said it is not serious at all.

In the poll, 27.2 percent said they have experienced discrimination in the past year.

Forty percent of the respondents also said discrimination in South Korea has gotten worse than in the past, mainly because of economic inequality, the poll said.

Asked to propose countermeasures against discrimination, 88.5 percent called for legislating an anti-discrimination law.

The poll, conducted online from April 22-27 by Realmeter at the request of the human rights watchdog, has a margin of error of plus or minus 3.1 percentage points at a 95 percent confidence level.