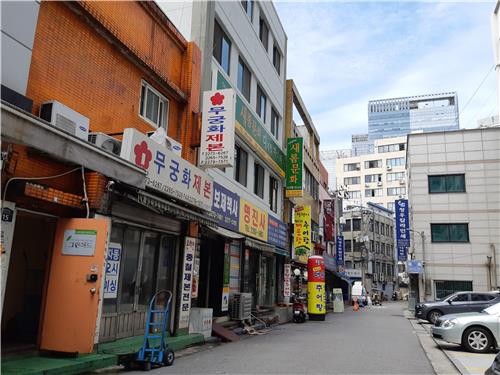 The alley in Euljiro where the cafe Hotel Soosunhwa is located. It is on the fourth floor of the white building on the left. (image: Yonhap)

SEOUL, Jul. 13 (Korea Bizwire) — Just a few blocks away from one of South Korea’s busiest office districts lies an old neighborhood that has withstood the ravages of time.

Euljiro — a 3-kilometer avenue that stretches from Seoul City Hall to Dongdaemun History and Culture Park — served as the heart of the country’s manufacturing industry in its heyday.

While Euljiro 1-ga — ga means street in Korean — and 2-ga form a forest of skyscrapers mostly filled with the headquarters of big corporations, 3-ga and 4-ga are still full of mom-and-pop shops that hold traces of the country’s rapid industrialization in the 1970s and ’80s.

Now, decades later, young people are coming back to the neighborhood, except this time, they aren’t manufacturers but artists.

Jewelry designer Won Hye-rim, 31, is one of many who have been seeking an affordable work space in the capital.

Along with two other designers, Won opened the atelier-cum-cafe Hotel Soosunhwa in 2015 on the fourth floor of an old building in Euljiro that doesn’t even have an elevator.

“Euljiro was the middle point for me and the two other designers, who each specialize in jewelry, bags and clothes, to procure materials for our work,” she said.

Won didn’t expect so many people to visit the cafe, which doesn’t even have a sign.

“It seems more people are touring around the neighborhood as interesting places are emerging here,” she said.

Cho Chan-seok, who has been working as a realtor in the area for 38 years, said inquiries from young people started to increase around two or three years ago. Now he gets about 20 such inquiries every month.

“They are mostly artists in their 20s and 30s, seeking a small place they can use as a combination of a workroom and a cafe,” he said. 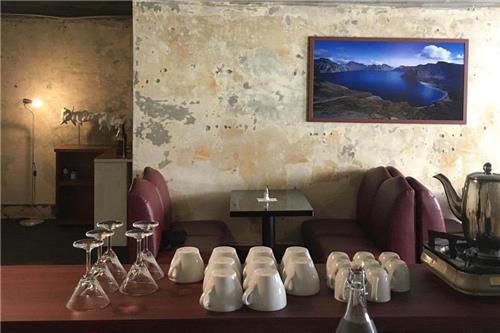 Euljiro is located at the center of the capital, yet rents are at a level that can’t be easily found anywhere else in the area.

“The upper floors of the four- to five-story buildings are mostly empty. The establishments are so old that they don’t usually have elevators, but the young people seem as if they couldn’t care less about it,” the realtor said. “For landlords, the spaces have been left empty for so long that they willingly lease the place at a comparatively low price.”

Unlike many newcomers to old neighborhoods who often try to expose their businesses and transform the area into another hip, modern district, young artists and cafe owners who come to Euljiro say they appreciate the nostalgic atmosphere hanging over the district.

“I love the contrasting images of Euljiro, which is so busy in the afternoon yet so quiet at night — with skyscrapers at one corner and these old and low-rise buildings at the other end,” said sculptor-turned-cafe owner Kang Kyeong-mi, who opened Baekdugangsan in March.

The inflow of young people into Euljiro is in line with the Jung Ward Office’s urban renewal project to set up ateliers for young artists who will work for the district’s revitalization.

Under the Euljiro Design and Art Project launched in 2015, the office gave rent subsidies to artists aged between 19 and 39 to pursue creative activities and give new vibrancy to the old neighborhood.

According to the ward office, 25 artists in nine teams are currently based in Euljiro, with the local authority paying 90 percent of their rent. Tenants’ payments of the remaining rent range from 40,000 won (US$36) to 130,000 won per month.

Artists say there is more to this district than the convenient access and cheap rent.

“The most amazing part is the presence of craftsmen with at least 20 years of expertise within walking distance. From ironworks to printing houses and lighting stores — you name it — they are all here,” said 28-year-old Ko Dae-woong, one of the artists who settled in the area under the district office’s support program.

The 155 meter-square space he shares with three other artists had been abandoned for nearly a decade before they opened the workroom in 2016.

Amid the government’s urban renewal efforts, concerns Euljiro would turn into another victim of rapid gentrification have been rising.

Some, like Garosugil, were long ago transformed into commercial districts where the most upscale brands, such as Apple, open their flagship stores, while others are struggling to find ways for original occupiers and new tenants to coexist.

Small manufacturing tenants in areas that are similar to Euljiro in many ways, such as Seongsudong in eastern Seoul and Mullaedong in the southwestern part of the city, have been gradually moving out following a spike in rents.

Louis Park, who opened a bar named Sikmul at Ikseondong and has witnessed the neighborhood turn into one of the most popular tourist destinations in just few years, forecast Euljiro’s development to evolve differently from other regions.

“Euljiro is much larger than Seochon, Bukchon or Ikseondong. More cafes, restaurants and shops will open, but the pace will be much slower,” he said.

Professor Park Jin-a at Seoul’s Hanyang University said the question will be how well the artists can cooperate with existing businesses, pointing out that their collaboration seems to be at an early stage at the moment.

“The key is finding a shared public interest or goal between the newcomers and the existing industry to include more people so that they participate in the joint projects and revitalization of the area,” the professor said.