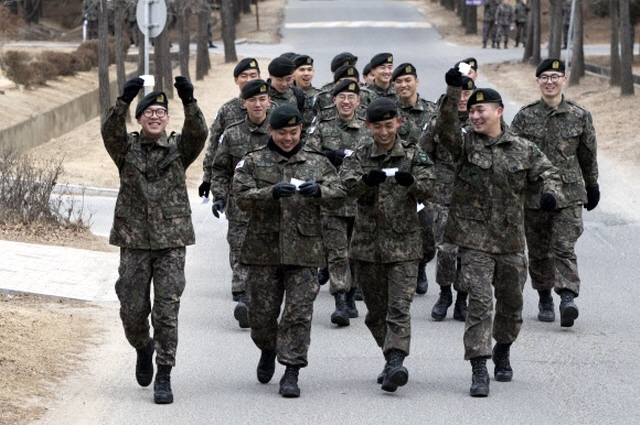 A group of soldiers of the 30th Mechanized Infantry Division in Goyang, north of Seoul, react to being allowed to go out of their barracks after work on Feb. 1, 2019. (Yonhap)

GOSEONG/YANGGU, Mar. 25 (Korea Bizwire) — Internet cafes, called “PC bangs” in Korean, are the favorite place for rank-and-file soldiers to spend time outside their barracks after work on weekdays, according to a survey released today.

On Feb. 1, the defense ministry allowed ordinary soldiers to go off base after work for four hours on weekdays between 5:30 p.m. and 9:30 p.m. up to twice a month. The move was designed to help the soldiers better communicate with society and to raise morale.

The northeastern border county of Goseong conducted the survey on 932 soldiers of the Army’s 22nd Infantry Division and 102nd Brigade who took advantage of this over the past month.

According to the survey, PC bangs were the most frequented place, with 44 percent of the respondents preferring them, followed by cafes (17 percent), karaoke rooms (8 percent) and chicken and pizza restaurants (7 percent).

A survey in the another northeastern border town, Yanggu, showed similar findings.

According to the recent poll of 373 soldiers, 49.6 percent patronized PC bangs, 17.4 percent went to convenience stores or cafes and 9.4 percent visited saunas.

Asked about which program they wanted to use, 29.5 percent answered they were interested in courses for computer qualifications, 20.9 percent said English-language programs and 14 percent said woodcraft courses.