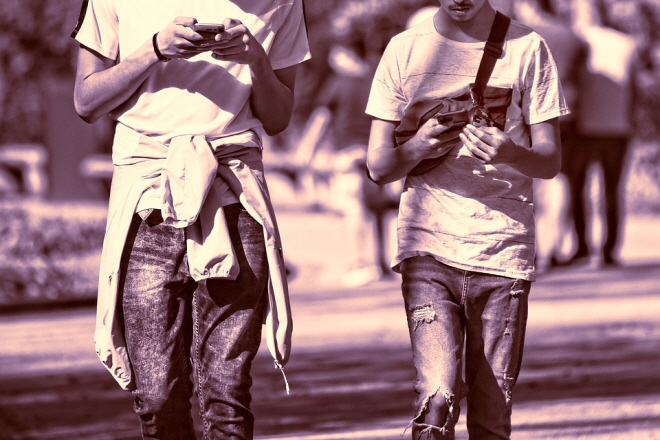 A study revealed recently that these smartphone users tilt their heads at different angles depending on whether they use the phone with one hand or two hands. (image: Pixabay)

SEOUL, Aug. 26 (Korea Bizwire) — Today, it is common to find people in streets, buses, and subways with their head angled downwards, staring at their smartphone.

A study revealed recently that these smartphone users tilt their heads at different angles depending on whether they use the phone with one hand or two hands.

A research team at the Ulsan National Institute of Science and Technology (UNIST) conducted a test on 28 college students to see how much they tilt their heads while walking around using a smartphone.

The results showed that participants tilted their heads down an average of 31.1 degrees (27.3 to 34.2) while walking and web browsing on a smartphone with one hand.

Considering that it is categorized as a steep slope if the incline of a surface is tilted by more than 30 degrees, these phone walkers are tilting their heads even more than that.

Participants tilted their heads down to an average of 38.5 degrees (35.7 to 41.0) when walking while sending a text message using both hands, 7.4 degrees steeper than the previous case.

The researchers explained that tilting the head adds pressure to the neck, and that text messaging while walking imposes stronger pressure on the neck than web browsing.

The team also observed that the head turns less while phone-walking than walking without a smartphone.

“Phone walkers tend to use more of the muscles located in the back of their necks, most likely to pin their heads to the smartphone screen as they walk,” explained UNIST Prof. Shin Gwan-seop, who led the research team.

Shin argued that such a practice adds pressure to the joints in the neck, and wears out the muscles more easily.

He recommended refraining from using a smartphone while walking in order to prevent smartphones from becoming a health risk.

“When using a smartphone while sitting, it is best to lie on the back of the chair, and place a cushion or a bag on your lap to put your arms at a higher position,” Shin said.