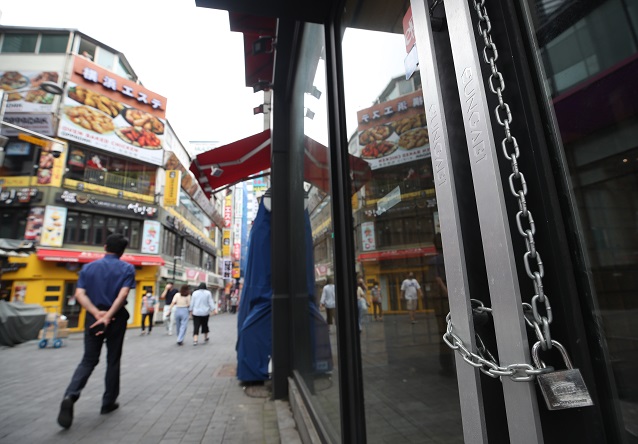 This photo, taken on Sept. 1, 2020, shows a closed shop in Seoul’s shopping district of Myeongdong as South Korea imposed stricter anti-virus curbs to fight the flare-up in virus cases. (Yonhap)

SEOUL, Sept. 21 (Korea Bizwire) — About eight months into the coronavirus pandemic, approximately 4 in 10 salaried employees in South Korea suffered a decline in their incomes and an increase in depression, while over 15 percent of them either lost or quit their jobs, a poll showed Monday.

According to the survey of 1,000 salaried workers aged from 19 to 55, 15.1 percent said they had either lost or quit their jobs after the COVID-19 outbreak erupted eight months ago.

Forty percent said they have serious anxiety due to the coronavirus pandemic, while another 19.2 percent complained about severe depression.

The poll was conducted nationwide by pollster Embrain Public from Sept. 7-10 at the request of the civic organization Gapjil 119, dedicated to stamping out power abuse by people in higher positions.

The survey found non-regular, low-income, female and manual workers were hit much harder in terms of COVID-19-related job and income losses and emotional damage.

It said 31.3 percent of non-regular workers either lost or quit their jobs over the past eight months, compared with 4.3 percent for their counterparts with regular employment status.

The corresponding rate for low-income workers earning less than 1.5 million won (US$1,300) a month was 29.9 percent, compared with 3.3 percent of those earning over 5 million won a month.

By gender, 20 percent of women either lost or quit their jobs, compared with 11.4 percent of men. The corresponding rates for service sector, manual and white-collar workers were 23.7 percent, 21 percent and 7.6 percent, respectively, the poll showed.

It said the coronavirus-related income loss was experienced by 56 percent of non-regular workers, nearly three times higher than 19.3 percent for regular workers.

As many as 79 percent of the respondents positively evaluated the government’s countermeasures against the pandemic, but 51.9 percent of them negatively assessed its response to the job crisis.